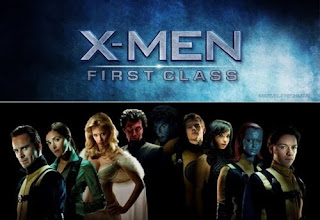 The powers that be at Marvel Entertainment - Marvel Studios and MTV have written and blogged about all of the excitement with the latest in X-Men fame.

In the new clip, Charles Xavier (James McAvoy) encounters some difficulty getting the government to accept the existence of mutants, but all that changes when Mystique (Jennifer Lawrence) decides to make an example of her own shape-shifting abilities.

Posted over at Yahoo Movies, the clip offers our first full scene from the film, which hits theaters June 3.

Previously, we gave you a comprehensive look at three of the other mutants appearing in the film, courtesy of a trio of exclusive character trailers for Banshee, Havok, and Beast. And while the promotional imagery for the film has left something to be desired, much of the footage revealed thus far has fans looking forward to the "First Class" premiere.

Our friends at Marvel Entertainment have run with the following...

We've got a special treat for you today, True Believers, with two Marvel.com-exclusive new TV spots for "X-Men: First Class," in theaters June 3!

Catch even more peeks at the film which details the early days of Professor X and Magneto's relationship, as well as the formation of the X-Men, in these exciting new spots! James McAvoy and Michael Fassbender bring the young Charles Xavier and Erik Lehnsherr to life in this action-packed journey back to the 1960s as we witness mankind's introduction to the X-Men!

Now without further ado, check out both of these awesome new TV spots, exclusively on Marvel.com!

In 1963, Charles Xavier starts up a school and later a team, for humans with superhuman abilities. Among them is Erik Lensherr, his best friend... and future archenemy.

Before Charles Xavier and Erik Lensherr took the names Professor X and Magneto, they were two young men discovering their powers for the first time. Before they were archenemies, they were closest of friends, working together, with other Mutants (some familiar, some new), to stop the greatest threat the world has ever known. In the process, a rift between them opened, which began the eternal war between Magneto's Brotherhood and Professor X's X-MEN. Written by Twentieth Century Fox.