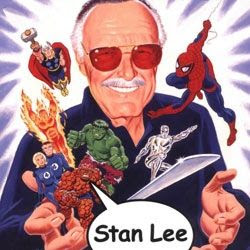 It's hard not to love Marvel Comics and Marvel Entertainment icon, the living legend himself, Stan Lee - unless you're on the wrong end of a lawsuit from him.

From Sydney's Bondi Beach to Hollywood, the world loves Stan 'The Man'.

These days to super fans and insiders he's as well known for hims cameos in comics-based movies as he is for his comics.

Media Man spies understand he was given the miss for a cameo in X-Men: First Class, but Lee recently let the cat out of the bag that he got the green light for "Captain America: The First Avenger" and "Amazing Spider-Man."

Reading between the lines "The Avengers" is looking good for Lee and his fans too.

Lee has been big on social media for a few years and his Twitter tweets remain some of the most popular in the universe.

"Warriors mine, grieve thee not that I have no cameo in X-Men 1st Class," Lee tweeted. "Tis just that the movie was filmed too far away for me to attend"

Lee did confirm his already filmed roles in the two above flicks however.

"But know ye t his, I have already completed my roles in Captain America and the new Spider-Man, so all is well in Cameo Land."

And while "X-Men: First Class" was a no-go, he's determined to get his cameo for "The Avengers."

"Next up--The Avengers," he wrote. "Unless they shoot it on the Moon nothing shall keep thy leader from making his awesome presence known! Excelsior!"

Since odds are "The Avengers" won't be shot on the moon, we are set to see the comics genius in that flick

As is said in comics heaven, Media Man and Marvel Universe land, when we love Marvel' efforts, Excelsior!

Has it written into his contract that he appears in any movie based upon a Marvel character that he is credited with. So far he has appeared as the Hot Dog Vendor in X-Men (2000), Man in Fair in Spider-Man (2002), Old Man at Crossing in Daredevil (2003), Security Guard in Hulk (2003), Man Dodging Debris in Spider-Man 2 (2004), Willie Lumpkin in Fantastic Four (2005), Waterhose Man in X-Men: The Last Stand (2006), Man in Times Square in Spider-Man 3 (2007), Rejected Wedding Guest in Fantastic 4: Rise of the Silver Surfer (2007), the man whom Tony Stark mistakes for Hugh Hefner in Iron Man (2008) and an uncredited appearance as the man who drinks the soft drink contaminated with Bruce Banner's blood in The Incredible Hulk (2008). The only one he has not appeared in was X2 (2003).