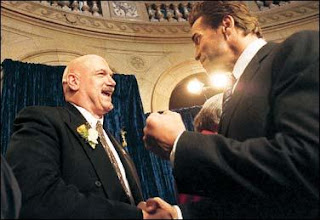 The man is no stranger to controversy. Media Man, newsrooms around the world... from Bondi Beach to New York...Mexico, the Wrestling News Media outfit and friends have followed his exploits in and out of the wrestling ring and political arena for decades. Many call him a living legend and a true American hero. Meet Jesse 'The Body' Ventura, aka 'The Mind'.

It's been suggested that the last thing Osama Bin Laden saw was what Jesse Ventura used to be...one of the Navy Seals from the U.S.

Navy Seals by default need to be able to fight, having got some of the best hand-to-hand combat available in the United States we understand.

How would have Ventura faired in a real fight about a Brock Lesner, Dan Severn, Frank Mir or even Kurt Angle? We will never know, but leaks say Ventura was and is one hell of a tough S.O.B.

Ventura is not only a former Navy Seal, officially known as a Naval Underwater Demolitions team (UDT) member , the precursor to the "Seals".

It would be been interesting to see Ventura fight MMA - UFC - no holds barred style in his prime. In the pro wrestling with his time at AWA and the old WWF, it seemed apparent he was a tough dude, but his style of pro wrestling made it difficult to see just how tough he may have been for real. How about his wrestling exploits with Rowdy Roddy Piper, Randy "Macho Man" Savage, Hulk Hogan, the late Adrian Adonis and WWE head honcho, Vince McMahon - the stuff of wrestling folk law.

It's hard not to dig Ventura's real life rock n roll wrestling connection, being a former bodyguard for The Rolling Stones, pro wrestling champion, ex-Governor Of Minnesota, TV talk show host and now, he’s a well-respected and best selling author with some extremely controversial things to say about the U.S government.

If you haven't done so already, grab yourself a copy of his latest book '63 Documents the Government Doesn't Want You to Read'. He gives his take on what he believes really happened before, during and after 9/11.

It's hard not to dig Ventura's movies like 'The Running Man' and who can forget 'Predator', where he played opposite Arnold Schwarzenegger.

The world awaits to see if Ventura will run for President, perhaps with Schwarzenegger as Vice... no, not that sort of vice friends. For a while it looked like Donald 'The Don' Trump was heading for that big white office in Washington, only just deciding to opt out of the presidential race.

Of course, Ventura might like to just jump back into corporate sports endorsements and the like, ala WWE, UFC and maybe even a bit of gaming and sports betting.

A few things are for sure. He will keep 'em guessing and we'll be hearing lots more from one of America's most powerful pens and voices.