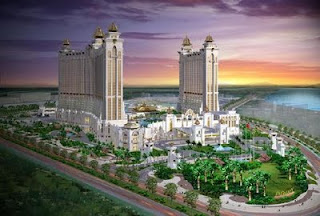 It's a galaxy of land based casinos out there, with Macau continuing to get their fair share of quota. Australian casino king James Packer, with a share in City Of Dreams Macau, right next door to the new Galaxy Casino, is paying close attention to the situation. Media Man, Gambling911 and many others see much of the world's casino press is paying quite a lot of attention to what may be the latest "casino war" to hit the Asia Pacific. Will the Asian dragons be unleashed or will both casinos coexist in a "friendly war" fashion ala Crown Casino VS Star City?...

The gambling powerhouse Galaxy Entertainment Group opened its $HK14.9 billion ($1.81 billion) casino resort in Macau less than 48 hours ago, and business is picking up.

Australian James Packer wasn't unhappy about Galaxy getting delayed for close to two-years due to the credit crunch, but now he has a new and switched on competitor, fishing for the same kind of whales and dolphins.

The new development would be "a strong catalyst for market growth" and would help boost revenue in the so-called mass-market gambling segment, which is more profitable, said Aaron Fischer and Huei Suen Ng, analysts for CLSA Asia-Pacific Markets.

Galaxy Macau is located on the Cotai Strip, where billionaire Sheldon 'Shillings' (satire) Adelson, Las Vegas Sands's chairman and chief executive, has said he planned to recreate the Las Vegas Strip. Sands's Venetian Macao, the world's biggest casino by floor area, is on the Cotai Strip, and Packer's Melco Crown's City of Dreams is across the road.

Gambling revenue in the former Portuguese colony rose an impressive 58% last year to 188.3 billion patacas ($22.3 billion), about 4 times that of the Las Vegas Strip. Casino gambling revenue in Macau will probably grow 35% to about $30.2 billion this year, according to estimates by CLSA Asia-Pacific Markets. Galaxy has almost quadrupled in market value over the past year, Wynn Macau has more than doubled and Sands China climbed 87% as gambling has surged in the world's biggest casino hub.

The CFO - beancounter of Galaxy, Robert Drake, told the press "We're very excited about the infrastructure development in mainland China, which will make Macau more accessible to the burgeoning middle class of China. The Macau market is projected to grow 15 to 20% this year, and with the development in mainland China and within Macau, we are quite confident we can sustain that growth."

Galaxy Macau, the biggest casino to be completed in the city since Melco Crown's City of Dreams in June 2009, is targeted at middle-class Chinese gamblers and may well boost the company's revenue at least 20% this year, said Francis Lui back in March. He is the company's deputy chairman and son of the construction tycoon Lui Che-woo.


Macau: Galaxy Of Universe For New Land Based Casino War - Galaxy VS City Of Dreams...

"We might well have the latest and greatest land based casino war on our hands...Galaxy VS City Of Dreams Macau", whispered a Media Man insider.

Early signs show that Galaxy Macau is off to a flying start, and Packer's COD is going to know its in a fight as the weeks and months roll on.

Galaxy's StarWorld casino made about 90% of first-quarter sales from gamblers betting as much as $250,000 a hand.

"It will help Galaxy diversify its business," said Cheng. "Being the only new casino in the city this year, when revenue is undergoing a strong and healthy period of growth, will also bring more people there."

Casino gambling revenue in Macau will likely expand 35% to about $US32 billion ($A30.2 billion) this year, according to estimates by CLSA Asia Pacific Markets. Galaxy has almost quadrupled in market value over the past year, Wynn Macau has more than doubled and Sands China climbed 87% as gambling has surged in the world's biggest casino hub.

The new venue will be "a strong catalyst for market growth" and will help boost revenue in the so-called mass-market gambling segment, which is more profitable, Aaron Fischer and Huei Suen Ng, Hong Kong-based analysts for CLSA Asia-Pacific Markets, said in a note to clients. Galaxy Macau is located on the Cotai Strip, where billionaire Sheldon Adelson, Las Vegas Sands Corp's chairman and chief executive officer, has said he planned to recreate the Las Vegas Strip. Sands' Venetian Macao, the world's biggest casino by floor area, is on the Cotai Strip, with Packer's Melco Crown's City of Dreams across the road from it. Gambling revenue in the former Portuguese colony leaped 58% last year to $US23.5 billion, about four times that of the Las Vegas Strip.

"We're very excited about the infrastructure development in mainland China, which will make Macau more accessible to the burgeoning middle class of China," Galaxy chief financial officer Robert Drake told the press. "The Macau market is projected to grow 15 to 20% this year and...we are quite confident that we can sustain that growth."

Galaxy Macau may boost the company's revenue at least 20% this year, Francis Lui, son of Lui Che Woo and the company's deputy chairman, said in March.

The confident talk coming from analysts and insiders is going to do little to quieten down the feeling that the world's biggest land based casino war is now on the way.

Aristocrat has secured well over 60 percent of the slot installation on the gaming floor at Galaxy Macau™ in Cotai, which opened on May 15, 2011. The newest destination resort is predicted to attract millions of visitors to Macau every year.

David Punter, General Manager Asia Pacific, said Aristocrat is committed to maintaining its market dominance in Asia through its broad range of market specific products for the region.

"Not only has Aristocrat secured the majority of slot machines in the main gaming floor of Galaxy Macau™, this is the highest market share of any casino opening in Asia and we are very proud to be a part of what will be one of the finest destinations in Cotai, Macau," Mr. Punter said.

Powered by the GEN7™ platform, the VIRIDIAN WS™ provides players with 24 percent more graphics area, high resolution graphics, enhanced stereo sound and is an example of how Aristocrat is leveraging the latest technology to deliver a more dynamic player experience.

"We are excited about the gaming experience that this product portfolio will bring to the gaming floor at Galaxy Macau™.

"We believe our VIRIDIAN WS™ cabinet, new product categories, a solid games library, and innovative product packages, will deliver the performance and diversity customers and operators will be looking for from the new casino," added Mr. Punter.

The mass gaming hall of the Galaxy Macau™ stretches the entire length of the casino at almost 300 meters (1,000 feet) long with 15-meter (50-feet) high ceilings and is lined with boundless retail delights and restaurants.

"Aristocrat is extremely proud to be associated with the Galaxy Entertainment Group and looks forward to a spectacular opening for one of the finest properties to open on the Cotai strip," concluded Mr. Punter.

Aristocrat Leisure Limited (ASX: ALL) is a leading global provider of gaming solutions. The Company is licensed by more than 200 regulators and its products and services are available in over 90 countries around the world. Aristocrat offers a diverse range of products and services including electronic gaming machines, interactive video terminal systems and casino management systems. For further information visit the company's website at www.aristocratgaming.com

Crown management, staff and punters are delighted to hear that chef Guillaume Brahimi will soon be opening a bistro at the Crown complex bearing his name. "It promises to be quite a bit better that the last, even with the French connection. Make no mistake, good gambling and great food and drinks do mix", whispered a Media Man insider. Bon Appétit.