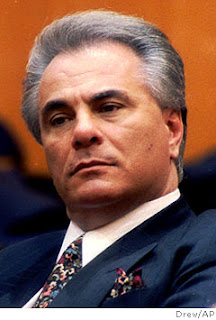 Want to place a bet that this Gotti flick will get made? Apparently the underworld is taking bets that it will, but you won't be able to place wagers at regular and above board betting agencies we're afraid. Media Man goes deep undercover with this report with collaboration with Gambling911 and a number of freelance agents in the field...

The Cannes film festival is often the launchpad for many a still-to-be-realised movie: the region is full off all kinds of folks. Time wasters and smart cookies.

Enter Barry Levinson, director of Diner, Tin Men and Rain Man, who has journeyed into Cannes to talk up a flick which is little more than a concept at time of press. We're talking about the biography of mafia boss John Gotti, or you might know him as "Teflon Don".

"I find it awkward to talk about a movie before there's a movie," says the 69-year-old Levinson. "I'm not crazy about any of this. I don't like speculation about what may or may not happen." But on some level, Levinson is something of a victim of circumstance: Gotti: Three Generations (as it is currently known) has been hot and well talked about in most media and public circles, and these points do matter somewhat.

Last March, it was announced John Travolta would play Gotti, with Nick Cassavetes directing. A strange press conference in New York a fortnight later saw Lindsay Lohan appear alongside Gotti's daughter Victoria, as well as the film's producer, Marc Fiore; shortly afterwards, Cassavetes quit, and Levinson was invited on board. Yeah, they say 90% of Hollywood or entertainment industry folks in general don't really know what they're doing, so this was just another day in the entertainment biz.

Casting rumours have been circulating for months, with Al Pacino the latest name apparently linked to project. (playing Aniello Dellacroce, Gotti's gangland mentor, we hear.) Pacino is tipped to line up with Joe Pesci, Lohan and Travolta's wife, Kelly Preston. But Levinson says that, apart from Travolta, he's looking at a blank slate. "I told 'em when I got involved, I got to write the screenplay first. I can't write to a previously announced cast. I guess I could bullshit you, but I'm not going to entertain every name bandied about.

"Look, Travolta is Gotti. That's confirmed. It's hard to do the Gotti film without Gotti. There are certain things you understand, and you write to that, but I can't deal with any of the other components until the script is done."

Levinson remains positive. "I met with John Gotti Jr (Gotti's son), and the conversations I had with him gave me insights into the crime family. I see it as an opportunity to do something more than just knocking out a mob movie."

What greatly interests Levinson, he states, is the father-son tension. Gotti Sr, who passed away in 2002, ran the Gambino crime family with an iron fist from the mid-80s until 1992, when he was finally convicted on charges including murder, racketeering and extortion. It was another mafioso, Sammy "the Bull" Gravano, that turned state's evidence and did in the boss. His son, John Jr, inherited his empire but eventually got labeled the nickname "Dumbfella" after a succession of mishaps. Gotti Jr has green-lighted the flick, after being released from prison in 2009. He has since claimed he quit the mafia life after starting his first jail term in 1999, and wants to in fact write for a living.

Levinson has gone on record: "If we can get it right, we can get a real good look at a father-son relationship. We got a mob boss who's almost legendary, and a son who comes into the family and then decides it's not something he wants. The drama is: how do you get out of a world when you are now in that powerful position?"

Levinson's own film-making career is at an interesting point. The days of Oscar nominations and real clout are behind him, but the success of two television shows he produced...Homicide: Life on the Street and Oz...dictates he is still a player in the industry. He is super keen to do the gangster movie based on legendary mobster figure. The timing is a bit too curious for some pointing to well known Guardian Angels founder Curtis Sliwa, whom John Jr was accused (and acquitted) of kidnapping. No one should be too surprised, since Hollywood, Vegas, gambling and mob activity have all mixed for decades. It's a small world in their world.

Levinson says "That comes with the territory. Who are we supposed to make movies about? Movies have to cover everything, and anyone, if there's a valid enough story. That is as it is."

Our friends at IMDB write: The film will reveal the relationship of a father who lived and died by the mob code and a son who, while brought up to lead a life of crime, chose to leave that world behind and redeem himself and the Gotti name. Never before has there been such an inside look at the Gotti family and their world of danger, betrayal and redemption. John Gotti was head of the Gambino crime family, which in its time was the largest and most powerful crime organization in the country. Known as the "Dapper Don," John Gotti's flamboyant style and outspoken personality made him one of the most famous mobsters of the 20th century and he ruled the underworld until he died from cancer in 2002 while serving a life sentence. In 1988, at the age of 24, Gotti Jr. became a "made man," and was officially inducted into the Mafia, making him the heir-apparent to head the Gambino crime family and follow in his father's footsteps...

All that's left to say it bet with your head, not over it, and for Levinson's sake, we hope the smart money is on him, and yes, there are some gambling themes.

A Media Man insider was overheard saying "Thank god no one was hurt in the putting together of this report. It was touch and go for a moment. I'm betting this flick will get made. Gotti Jr wants it done, so he wish should come to pass. That would be good business and risk management".