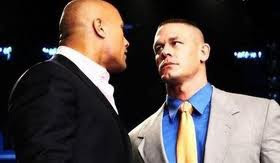 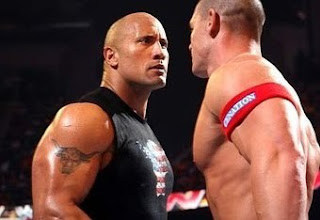 The Rock's return to pro wrestling er... sports entertainment, or whatever it is now, has little to do with wrestling as such.

The booking The Rock vs. John Cena at WrestleMania 28 twelve months in advance has strong merit, but will both competitors be as hot then, as they are now... probably.

This is one of the smartest moves ever by WWE head honcho Vince McMahon, as it plugs right back into mainstream entertainment, with a hot main event which has star power and money written all over it, plus news media is going to have it as a media darling to boot. I don't see Rock or Cena "stuffing up" with real life situations that would stop the match, and hopefully both will remain injury free.

What's were doing here is getting Dwayne "The Rock" Johnson, the living legend himself, and putting him in the squared circles with one of the most popular pre-teen megastars ever. This is the pop culture main event of the decade, if not century!

Wrestling fans will go for this big, and spend, plus it should be a decent match to keep the loyal fan base happy too. Most mainstream news media companies should cover it also, and the buzz and coverage leading up is already there, so just imagine. Bigger than the MTV Hulk Hogan VS "Rowdy" Roddy Piper 'War To Settle The Score', Andre The Giant at WrestleMania III, and perhaps even up there with the very first WrestleMania back in 1985 which came from sports and entertainment mecca in New York - Madison Square Garden.

The Rock VS John Cena at WrestleMania is tipped to break all sorts of records and have mega success written all over it. At The Rock would say, Just Bring It!

Stay turned to Media Man, Wrestling News Media and our friends at Google News as the saga continues.