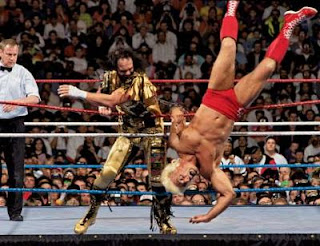 Professional wrestling superstar Randy "Macho Man" Savage passed away after having a heart attack while driving his Jeep Wrangler in Seminole, Florida.

According to a source, the recent allegations made by WWE Hall of Famers George "The Animal" Steele and "Rowdy" Roddy Piper concerning Vince McMahon's soured relationship with Randy Savage have nothing to do with the WWE chief's animosity towards the late wrestler.

Piper alleged last Friday on Twitter that Savage slapped McMahon in a bar. Steele then suggested in an interview that McMahon held Savage in contempt for abruptly jumping to World Championship Wrestling in 1994 because he considered him "almost like a son."

Steele said, "I think that what happened with Randy, when his career was winding down with the WWF, Vince McMahon just loved Randy. After all everything Randy had done and he took him under his wing, and he wanted Randy after the ring was over with for him, he wanted him to be our spokesperson. He was traveling with Vince all the time. Randy was almost like a son, they were really tight. And then one day, we were at a TV meeting, and we got word that Randy, without calling Vince, had left and jumped to the WCW. I had never seen Vince McMahon broken before, he was crushed. It hurt him big time and I don't think he ever got over that. I think that's the real problem to be honest with you."

In late 1996, Savage's contract with WCW had expired and he briefly negotiated with WWE regarding a possible return to the organization. According to the source, during this time frame, Vince McMahon told him he would take back Savage "with open arms," but would "never ever" take Hulk Hogan back.

McMahon's animosity towards Savage during the final years of the wrestling legend's life stemmed from an incident that occurred following 1996, or "something he found out."

"Any explanation of why Vince hates Savage that has to do with something that Vince would have known pre-1996 is clearly balderdash," the source stated. "Either something post 1996, or something he found out after 1996."

There is a long-standing rumor indicating that Savage was involved in a sexual relationship with McMahon's daughter Stephanie during his final year in WWE, therefore explaining his animosity towards him (which McMahon learned years later). While the allegation has never been verified, top WWE officials believed the rumor to be true.

"When I first heard the story I didn't believe it because I thought it was just some story, but then, and I mean even when people who are very high up in that company, after they left the company, would tell me that story I still didn't believe it, but, you know, after a certain number of years when it's just, you know, ideas are brought up for Randy Savage and the reaction - there's something real, real bad because, let's face it, I mean, I couldn't count the number of times Vince said he would never do business with Hulk Hogan, and he always does. So, I don't know...Actually, as time goes by, more people talk about it trying to say that it didn't happen.", the source said. Source: The Wrestling Observer Newsletter

A Media Man staffer was overhead "Savage was one of the greatest ever and a true legend. He was up there with Hulk Hogan, Roddy Piper, Flair and Steamboat. It was great to see the tribute by the WWE and would even be sweeter to also see him finally inducted into the WWE Hall of Fame. Thanks for the awesome memories Randy".