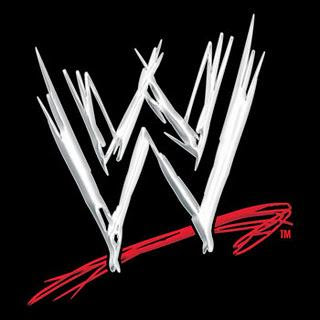 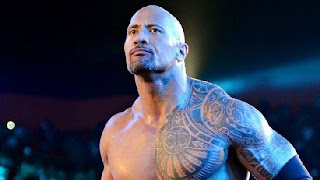 Pro wrestling and movie fans - add yet another production shoot to The Rock's commitments in First Quarter 2013. Rock noted Sunday during a "Rock Talk" Twitter Q&A that filming begins in February on his new TNT show, "The Hero."

"I wanted to create @TheHeroTNT to entertain millions & give people a shot at personal greatness. We shoot in FEB!" Rock tweeted. "My schedule is hellacious & my goals I've chosen to achieve are HARD. So, my daily focus on training is my anchor."

As for the first month of 2013, Rock reinforced that he's anticipating facing C.M. Punk, who is currently injured, for the WWE Title at the Royal Rumble.

"I can't wait to face @CMPunk for the @WWE Championship at Royal Rumble. Been training for months for this moment," Rock tweeted.

His favorite artist: “Sam Cooke is my fav artist. #Soul I love ALL genres of music – from hip hop to orchestral to traditional country..”

If he would post for Playgirl: “I’d pose for Playgirl, but there just ain’t enough pages to showcase me baby! << TONS of cheese on that answer.;).”

His upcoming movies: “Im excited for all my 2013 movies: SNITCH, GI JOE, PAIN & GAIN & FAST 6. Tons of hard work & eager for you to see… FAST 6 is gonna be killer. Stakes are higher, cars are cooler and Im tougher than a 2 dollar steak well done. Michael Bay’s PAIN & GAIN is a very unique & cool movie. The most challenging role I’ve ever played. April 2013.”

His new show on TNT, The Hero: “I wanted to create @TheHeroTNT to entertain millions & give people a shot at personal greatness. We shoot in FEB!”

His favorite co-star: “In Hollywood, I’ve been lucky to work w/ so many talented & beautiful leading ladies, but #JulieAndrewsIsQueen”

Future plans: “As an actor, producer or even in @WWE – the goal is to be a positive force & entertain the world. And keep growin!”

In addition to filming new movies and squeezing in WWE appearances to hype the Rumble and WrestleMania 29, Rock will also be promoting movies scheduled for theatrical release.


The Rock comments on heat with CM Punk...

When quizzed on Twitter if he has heat with Punk - Rock replied, "Of course not my friend. I love Phillip & he loves me."

What will close the Royal Rumble: "Already getting questions about what attraction will close the show at WWE Royal Rumble, @CMPunk vs. @TheRock or the Rumble match? I haven't a clue nor do I care as either choice would be fine with me but if I had to guess I'd guess it would be the WWE Title bout. Again, don't know and don't care as I will be watching one of my favorite PPV events of the year.

"My guess is that Punk will push Rock inside the ring from bell to bell unlike Rock has been pushed since, arguably, the @steveaustinBSR days. That's not taking any thing away from @JohnCena who wrestles at a different pace that Austin did or Punk likes to. How does even an athlete as gifted as @TheRock prepare for what awaits inside the 20 foot ring? Cardio is great but nothing replicates wrestling long matches better than wrestling long matches." 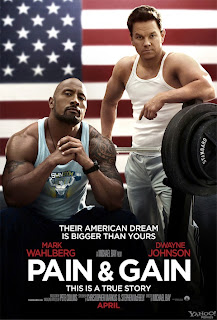 Based on a 1999 Miami New Times story, Pain & Gain is an action comedy that follows a pair of bodybuilders who turn to extortion, kidnapping, and murder. The film has long been the Transformers director’s passion project. In 2007, Bay told media that he became attached to the movie because he loved the characters, promising there wouldn’t be too many explosions. “It’s like a mixture of Fargo and Pulp Fiction and it’s all true,” he said. “And they’re all knuckleheads. It’s a fun character piece. No action. One car crash.” The movie tag-line - "Their American Dream is Bigger than yours".

Rolling Stones fans can come to Yahoo! for historic footage including past concerts, band interviews and backstage access. Beginning at 8:30 p.m. ET/ 5:30 p.m. PT on December 15, fans can watch an exclusive special entitled Countdown to the Rolling Stones, featuring pre-show activities and a countdown of the 10 greatest Rolling Stones moments of all-time.

The Rolling Stones concert is the latest in a series of exclusive special music events accessible to millions of viewers on Yahoo! From concerts such as the Clinton Foundation 10th Anniversary and iHeart Radio festival, to red carpet premieres for "Twilight: Breaking Dawn" and "The Hunger Games," Yahoo! brings our users their latest entertainment obsessions and their time-honored favorites, across computers and mobile devices.

"The Rolling Stones' music has crossed generations and the world and Yahoo! is excited to bring this very special music event to our global audience," said Erin McPherson, Vice President and Head of Yahoo!'s video and originals. "The Rolling Stones are living legends, and we are honored that the band and WWE chose us to be a part of their 50th anniversary celebration."

"We are pleased to partner with Yahoo!, a global leader in digital media, to bring the Rolling Stones pay-per-view online to millions across the world," said Vince McMahon, Chairman and CEO, WWE. "Our partnership will create unprecedented reach for this historic event."

WWE, the world's pre-eminent provider of pay-per-view programming, in partnership with Dainty Group and Endemol, will distribute the pay-per-view event globally. For additional information on how to watch the pay-per-view event in your market, please visit www.rollingstones.com/watch. And the Official Rolling Stones app is now available on the App Store http://bit.ly/UaJTNQ.

WHAT: Yahoo! Music (http://music.yahoo.com) to host the exclusive pay-per-view live stream of the Rolling Stones' 50th Anniversary concert from The Prudential Center.

WHERE: Concert to be streamed globally on Yahoo! Music (http://music.yahoo.com).

WWE, a publicly traded company (NYSE: WWE), is an integrated media organization and recognized leader in global entertainment. The company consists of a portfolio of businesses that create and deliver original content 52 weeks a year to a global audience. WWE is committed to family-friendly entertainment on its television programming, pay-per-view, digital media and publishing platforms. WWE programming is broadcast in more than 145 countries and 30 languages and reaches more than 600 million homes worldwide. The company is headquartered in Stamford, Conn., with offices in New York, Los Angeles, Miami, London, Mumbai, Shanghai, Singapore, Istanbul and Tokyo.

Additional information on WWE (NYSE: WWE) can be found at wwe.com and corporate.wwe.com. For information on our global activities, go to http://www.wwe.com/worldwide/.

Yahoo! is focused on making the world's daily habits more inspiring and entertaining. By creating highly personalized experiences for our users, we keep people connected to what matters most to them, across devices and around the world. In turn, we create value for advertisers by connecting them with the audiences that build their businesses. Yahoo! is headquartered in Sunnyvale, Calif., and has offices located throughout the Americas, Asia Pacific (APAC) and the Europe, Middle East and Africa (EMEA) regions. For more information, visit the pressroom (pressroom.yahoo.net) or the company's blog (yodel.yahoo.com). 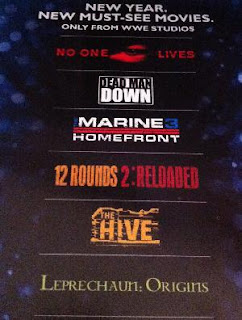 WWE Studios has released the full line-up of their 2013 movie releases, some of which will be theatrical releases and others will be straight-to-DVD.

If the last few years of WWE Studios flicks are anything to go by, it will be a mixed bag, but the good news is that there should be one or two gems and pleasant surprises in there... not just B and C grade stuff. Wrestling fans... you got to wonder what it would take for 'The Rock' to sign up to Vince McMahon's WWE Studios - even for 1 or 2 films. Maybe the answer is more money than McMahon is currently willing to offer 'The Great One'. Speaking of The Rock, be sure to check out 'The Hero' when it finally hits television. Time will tell if it finally makes it to Rupert Murdoch influenced Foxtel, but it stands to reason if the public let Foxtel know they want more of 'The Rock', it may help achieve the positive result that fans are looking for.

The following is the 2013 WWE Studios movie schedule:

Foxtel will launch a simplified movie service for its subscribers from next year.

It will offer high definition ad-break free movies as well an increased On Demand offering.

Those who subscribe for the package will have access to seven Foxtel movie channels and the dedicated premium drama channel, showcase, which will screen award-winning drama series, many of which will be broadcast express from the US.

Foxtel chief executive Richard Freudenstein says this will change the way Australians will be able to experience movies.

Current subscribers to both movie packages will automatically receive all seven new Foxtel movie channels as well as showcase, World Movies and the two +2 channels (Premiere and showcase).

The new package will be available from January 1.