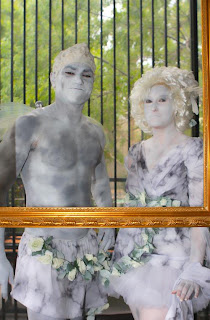 Human Statue Bodyart was once again called upon by an ultra successful theatrical entertainment company, in collaboration with a major Australian dining destination, to help make them stand out from the pack and create a magical evening's entertainment, and once again Human Statue delivered with spades (and fairy statues).

Artists Eva Rinaldi, Vince Cantali and Andrew made up the two models, Phylicia and Daniel, who became unrecognisable once they were fully made out as fairies.

The fairies complimented the Christmas elves and the overall complete entertainment package which was the 'Mid Summer Nights' Dream', South American style, one the first night of Summer in Australia, and what a hot night of entertainment it was. Promo...

It’s quite simple. Chimmichurri is about sharing great food and drink with friends.

This may or may not include dancing on tables, joyful gluttony, excessive indulgence and just plain old good times. It's spacious kitchen is staffed by some of the best! chef's in Sydney.

When asked about the cuisine and style of this venture the chefs' were unable to define it or give it a name. They did comment that a portion of the menu is a result of the South American heritage and a consequence of a culture dominated by BBQ style cooking using natural wood fire and charcoal.

So how do they get it so right and so good? Easy, they like to keep things simple in the kitchen!!! Although the menu may appear complex and lengthy, the secrets are in the marinades. Basic simple but tasty natural ingredients. Sauces should mainly be used to experience new flavours and textures, not to better flavour meat and that is why Chimmichurri has created it's own line of marinades and sauces (find them on the menu) to complement the Churrasco or your favourite steak or burger!

Recommendations? The Salt & Pepper Prawns served by the Kilo, the 8 hour slow cooked Lamb, the burger 750 (3 paddies of 250 gram Australian pure beef) and ribs, ribs, ribs - enjoy them sweet, basted in Chimmi's own BBQ sauce [up to 1.5Kg] or slow cooked to perfection over the in-ground wood fire BBQ Pit 'Assado style'. And of course the 20 plus skewered varieties of meat, poultry and seafood 'all you can eat' Brazilian BBQ Churrasco!

Just like the eponymous South American marinade it's named after, Chimmichurri promises a bit of spice and a lot of flavour to the dining experience. The name is fun and quirky, definitely not something you're going to forget in a hurry, just like the cocktail trolley that wanders through the tables in the evening offering you a choice of exotic Caipiroskas, Caipirinhas and Mojitos.... See you there!

Contact Eva and her team at Human Statue Bodyart to see how they can help make you stand out from the pack and make your vision a reality.


Tell us that you heard about Human Statue Bodyart from Street Corner and Google News for a special discount! Don't forget about New Years Eve parties coming up. From small events to major events, functions and festivals, the team at Human Statue Bodyart is here to help you see your creative arts and marketing ideas coming to reality. 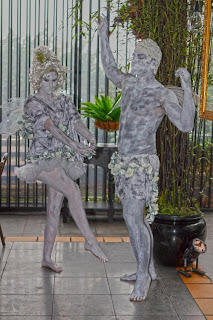