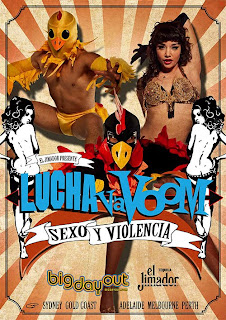 Direct from the US, the Lucha VaVOOM troupe will be putting on a show quite unlike any other at BIG DAY OUT 2013. Lucha VaVOOM is non-stop, action-packed surrealism where Mexican masked wrestlers perform breathtaking acrobatic feats in a fast-paced, fun-filled, character-driven style. Known for their far-out flamboyance, its quick, exhibition-style, one-fall Lucha Libre matches designed for maximum enjoyment and action.

The ultimate distraction, Lucha VaVOOM like a little sexo with their violencia; in between matches the finest handpicked burlesque acts from around the world wow the crowds with their unique striptease skills including raucous aerial acts, pogo-stick peelers and hula-hoop hotties. Their insane antics have Jack Black proclaiming “Lucha VaVOOM is the shit!” and it’s easy to see why.

Celebrating their tenth anniversary, Lucha VaVOOM have only got crazier over time. Rooted in history, they draw inspiration from the bizarre world of sixties Mexican Lucha Cinema. The troupe has been considered one of the most outrageous shows on earth having performed sold-out shows all around the world, they have taken to the stage alongside the likes of legends such as Jon Stewart and Dave Chappelle, as well as appearances on Jimmy Kimmel, Attack of the Show, Carson Daly and A Current Affair. Los Angeles Times said the Lucha VaVOOM show “has the pacing of a prison break” and BIG DAY OUT 2013 punters are set for something spectacular with the crew perform in a dedicated area. Here’s what the press have had to say:

“… It’s enough to make even the most jaded Hollywood insider jump up and yell ‘Smackdown.” ROLLING STONE

“…a raucous and irreverent extravaganza of burlesque, comedy and classic Mexican luchadore wrestling.” THE HUFFINGTON POST.

“Lucha VaVoom is the most exciting, bonkers show I’ve seen in ages.” THE FACE (UK)

“…a weird mix of cabaret, burlesque, Mexican Luchador wrestling with a live DJ, crowd interaction and commentary…depending on the night, people like Drew Carey turn up to do commentary for it. It is the most bizarre experience. The entire audience is dressed up and it’s like Halloween, everyone is in some weird costume. It was the greatest night of entertainment I have probably seen in my entire life.” ROVE MCMANUS

Lucha VaVOOM will be appearing at the El Jimador Mexican Wrestling Bar at all 2013 Big Day Out dates.

In-between matches, the finest, handpicked burlesque acts from around the world astound; at Lucha VaVOOM, we like a little sexo with our violencia. Raucous aerial acts, Pogo-stick peelers, hula-hoop hotties; we’ve got it all!

It all began in August 2003 as a one off event. The overwhelming crowd response convinced Rita & Liz to do it again, and as soon as possible.

Ever since, Lucha VaVOOM has played at the Mayan Theater in Los Angeles three times a year -- Valentines Day, Mid-summer, and Halloween. From there, Lucha brought it’s circus to Toronto, where they did two nights at the Koolhaus and made every newspaper and TV news program, including Much Music.

In 2005, Lucha VaVOOM was asked to be a part of the first HBO Las Vegas Comedy Festival, where they performed alongside Jon Stewart, Lewis Black and Dave Chapelle. That same year they performed at the famous Sony E3 party at Dodger Stadium, where they took the spotlight away from the Pussycat Dolls.

Lucha VaVOOM has gone on to perform in Chicago, San Francisco and Amsterdam, with more cities on the way. 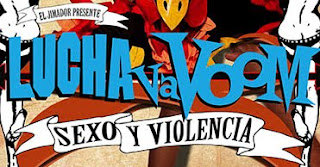