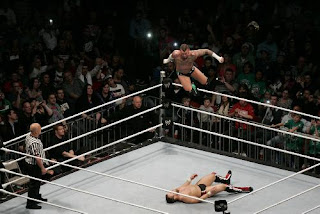 WrestleMania (Australian style) returned to Sydney on Friday night and the show did not disappoint.

Pro wrestling fans young and old got their fix of WWE grapplers.

The WWE marketing and media machine can be attributed to what looked to be a 90 percent full Allphones Arena - making it a crowd of approximatly 15,000. It's unclear how much of the crowd was papered (unpaid), but the smart money says it was fans who parted with their hard earned money.

A mixed crowd of both hardcore fans, casual fans and families, who were pretty vocal and hyped up for the show.

The show commenced with Brodus Clay VS Jack Swagger. Naomi was with Brodus, no Cameron. Swagger got some good heat, but Brodus got his hand raised quick. Entertaining and fun, but not a classic wrestling match - nor was it supposed to be. Kids just love Clay.

Next was the divas (ladies) match. WWE Divas Champion Layla defeated Rosa Mendes. We appreciated the effort of the ladies but its safe to say the WWE should raise the bar in the Diva's division. Maybe bring in a few Japanese lady pro wrestlers as well as snatch some of TNA Wrestling's best also. WWE have so much TV time to fill up, so ramp up the Diva's for the female and male fans in the WWE Universe.

WWE Tag Team Champions R-Truth and Kingston beat Primo and Epico in a solid match. R-Truth was on fire, both with in-ring skills and the mic, and 'Little Jimmy' was over big time with young and old.

The Miz defeated Alex Riley to retain the Intercontinental Championship. The Miz got strong heat. Nice mic work telling everyone he wasn't "awful", but "awesome". AR was surprisingly over. Maybe because he's a pretty strong worker and Australian fans are not overexposed to the WWE product (with live shows), like rather spoilt American fans. Lot's of Wooooo's! (for the chops), respecting Ric Flair, who most fans want to see return to his rightful home - WWE.

Zack Ryder defeated Tensai. Zack Ryder got a huge pop and Tensai got pretty decent heat and reactions. At least Tensai looks like a pro wrestling "monster" - he has the look and size, and moves well for a big man. Younger fans seem to be scared of Tensai and went nuts when Ryder got the win.

Santino defeated David Otunga. Decent heat for Otunga. Santino is over in Australia, but not as much as he is in the U.S. Keep WWE belts off both these guys... they don't need them. They worked the crowd fairly well and Santino is funny, but this was not a classic wrestling match - and it was never expected to be. Passable - just.

CM Punk defeated Daniel Bryan to retain the WWE Championship in an awesome match which went for almost 30 minutes. Stalling by both at first, but the crowd was pretty into it. Established characters can stall for ages with little fan backlash - the way the late Randy "Macho Man" Randy Savage and living legends Hulk Hogan and Ric Flair used to do. CM Punk worked as a face and was over big time. "Yes" chant all throughout the match as well. Tons of fan signs for both and lots of fans bought their t-shirts.

John Cena defeated The Big Show and John Laurinaitis in the main event. Decent match for these guys. After the match Laurinaitis attacked Cena with a chair, but Cena turned around and hit him with an attitude adjustment to finish the show.

Overall strong show - especially for an Australian WWE show, which were mixed in the past. We're giving it 8 out of 10 and it was value for money.

Match Of The Show:

Room for improvement: More strong WWE Divas, bring back Ric Flair urgently (1000s of fans did the Woooooo!), bring Ziggler and Randy Orton to the next Australian show, have 2 top line NXT talents on the next down under show. It would be nice to see Ric Flair and Hulk Hogan back with the WWE. Strong rumours Flair will be back within a month or two, so hopefully he makes the next Australian tour. Wooooo! 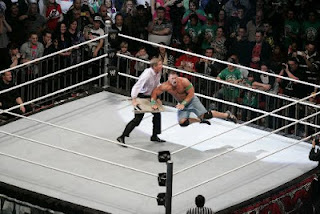