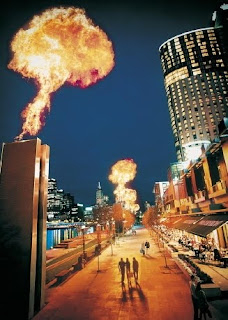 The 'Australian Casino Wars' continue, and as you would expect, the creme of Australia's and the world's entertainers and promoters are in the thick of the action... and don't forget the tipped extreme cabaret, bodypainting entertainment, burlesque and Oriental style entertainment.

We've been tipped off that an extreme gold 'Joker Jesture' was seen running around Melbourne's Crown Casino last Friday night as part of the billed entertainment for a cashed up Oriental based technology gig. Some witnesses described the golden Joker as a "living, moving, human statue", and now we learn that other Australian casinos, resorts and hotels are looking to book this mysterious joker that popped out of a house of cards.

Our friends at Human Statue Bodyart seem to know more about the 'Joker Jesture' than the average Joe or Jane and its understood that they have provided services to Crown Casino and The Star off and on for a few years now, and everyone knows the old saying "Where there's smoke, there's fire". Word is bodypaint and extreme cabaret are on the menu for the Australia casino war entertainment for the foreseeable future.

The Australian bee gees show is now taking the vegas show back on the road for select dates back home.

After 16 years and over 2,000 performances on the world stage, The Australian Bee Gees Show is now the toast of Las Vegas. The show has been in residence at The Excalibur Casino on the Las Vegas strip since February 2011 and has just celebrated 500 performances in Las Vegas. The Australian Bee Gees Show is now taking the Vegas show back on the road for select dates back home in Australia.

The new show features a chronology of the greatest hits from the wonderful music of the Brothers Gibb. Special guests on stage will be the Stayin' Alive Brass section. The Australian Bee Gees Show have captured the look, the sound and the personality that defines one of the most successful and adored acts in musical history.

Crown’s annual crowd-pleaser, focus on footy, is on again.

The Focus on Footy exhibition is FREE and open all day, every day. Find it in the Retail precinct on Level 1.

The annual showcase of dance students.

Theatre De La DanSe presents 'Spirit of Australia' - the annual showcase of dance students age 5 to 21. This will be a celebration of all things Australian including icons, music, and sport.

Performing hits from roy orbison, the travelling wilbury’s along with his most popular songs.

To celebrate the release of Damien's new studio album 'Now and Then', Damien hits the road in September on his National Theatre Tour of Australia.

Damien's new album 'Now & Then' continues where he left off on his album 'Roy' and celebrates the song writing skills of each member of The Traveling Wilburys (Roy Orbison, George Harrison, Tom Petty, Bob Dylan and Jeff Lynne) along with showcasing songs written by Damien himself. Already this album is being rumoured as Damien's best work to date.

Following the success of his multi date Roy Orbison Tribute' tour last year, this new show will revisit some of your favourite Roy Orbison classics while also treating the audience ears to the songs of 'Now & Then'. Audiences will be wowed by songs like 'Crying' and 'Oh Pretty Woman', 'Here Comes The Sun' and 'Got My Mind Set On You', 'I'll Be Your Baby Tonight' and 'Leah' along with all new originals compositions. If you enjoyed 'The Roy Orbison Tour' - then this concert is one not to be missed! Damien Leith and his four piece band, performing live!

Damien is the ONLY AUSTRALIAN ARTIST that Roy Orbison's estate, via his wife Barbara Orbison, would work with for Damien's hugely successful ROY: A Tribute To Roy Orbison album. The album became the 4th most successful record of 2011 and Damien performed over 23 shows to critical acclaim. ROY: A Tribute to Roy Orbison became the only album released to celebrate the great Roy O's 75th anniversary celebrations.

Richard clapton’s music is a bona fide soundtrack to a generation.

Richard Clapton, Australia's most prolific and iconic singer-songwriter returns to The Palms for the latest instalment of his story, this time with a twist as he previews new material from his upcoming album scheduled for release in mid-July. A former commercial artist, Richard Clapton, started his musical career in the late 60's but it wasn't until the early 70's that he had his first big hit, Girls on the Avenue, which was originally earmarked as a "B" side. "Girls" went on to reach No. 2 on the national charts and put Richard firmly on the musical map. In 2009, Clapton showcased his pivotal 1977 album Goodbye Tiger with sold out concerts nationally including The Palms at Crown.

Richard Clapton will deliver his hallmark songs like I Am An Island, The Best Years of Our Lives, Capricorn Dancer, Girls on the Avenue, Glory Road, Goodbye Tiger, Trust Somebody, Get Back to the Shelter, Down in the Lucky Country as well as a snippet of songs from his first studio album release in 8 years which will have you singing along from start to finish.

Richard Clapton's music is a bona fide soundtrack to a generation and to see and hear him live is one of the most enjoyable trips down memory lane any music fan can have.

Crown is one of Australia’s largest entertainment groups. The group’s core businesses and investments are in the integrated resorts sector. Crown wholly owns and operates two of Australia’s leading integrated resorts, Crown Entertainment Complex in Melbourne and Burswood Entertainment Complex in Perth. Overseas, Crown also fully owns and operates the Aspinalls Club in London. Crown holds a significant interest in Melco Crown Entertainment Limited, a NASDAQ and Stock Exchange of Hong Kong (SEHK) listed company operating casino/hotel properties in Macau which include City of Dreams, Altira Macau and Mocha Clubs. Melco Crown also has a 60% interest in Macau Studio City, a new large scale integrated resort project on Cotai.
In addition, Crown owns a portfolio of gaming investments that have been accumulated to complement Crown's existing core businesses. These include interests in:

Legally Blonde The Musical is the hilarious story of college sweetheart and homecoming queen, Elle Woods - a girl who doesn't take no for an answer. When her boyfriend dumps her for someone "serious", Elle puts down the credit card, hits the books and heads for Harvard Law School!

This award-winning production tells the heart-wrenching story of Joey, the beloved horse of a boy called Albert, who is sold to the cavalry at the outbreak of World War I. With life size puppets created by South Africa's Handspring Puppet Company this will be an unforgettable theatrical experience. Tickets on sale 23 July.​

​Catch international singer-songwriter, James Walsh (Starsailor, UK) every Thursday (6, 13, 20 & 27) in September. Just over a year after putting his band Starsailor on hold, he has toured with Sheryl Crow & songwriter/producer Sacha Skarbek (Duffy, Adele). With his acoustic guitar and raw real tunes, he’ll be sure to impress. No cover, doors open at 6pm.​

Check Your Head night is on at Rock Lily on Friday 14 September with headliner Prinnie Stevens. Having been best known as a backing vocalist to Guy Sebastian and Jessica Mauboy, Prinnie rose to fame from The Voice. She has also performed alongside the likes of Mary J Blige and John Legend. Don’t miss out on what will be an epic night. No cover. (14th September)

Sydney-based House music duo FONIKO have become known for their larger than life sets that take their audience on an epic journey through space and time. Their ability to instinctively remix tracks live, is what contributes towards their signature sound: big, raw, spontaneous and unrestrained. An experience not to be missed.

For all things sports-related, head to 24/7 Sports Bar. With three mega screens and over 50 LCD TVs you'll never miss a minute of the action, no matter what you're into.

Fuel at 24/7 Sports Bar offers a full menu of pub classics, plus you'll find Australia's first paperless TAB right in the middle of the action.

Celebrate The Men of League’s Great Grand Final Night as Peter Sterling, Andrew Johns, Brad Fittler and host Dan Ginnane take you through 30 years of great grand final memories, whilst enjoying a three-course dinner. $150 pp, $100 of which goes to The Men of League Foundation. Call 1800 700 700 to book.

The Voice finalist Prinnie headlines Check Your Head this Friday.

The Star is in the heart of the city and is Sydney's casino destination. Project Future Star, an $860m refurbishment and expansion plan, will position The Star as the pre-eminent entertainment destination in Australia.

It's always good to see Australians taking on the world, be it Crown Melbourne and Sydney's The Star taking on Las Vegas casino - resort heavyweights, so hopefully the trend of world class entertainment including performing arts and creative arts elements continue on at Australia's own intergrated entertainment resorts and casinos.

We hear that a number of world class acts are heading to Sydney's Star and Melbourne's Crown, and there's tipped to be some bodypainting elements, extreme cabaret (not unlike what has appeared at Sydney Hilton Hotel) and much more, so keep checking back here for more details.