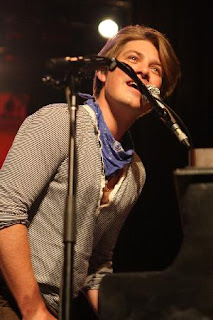 Tonight Hanson performed to a packed house at the famous Enmore Theatre.

The boys are performing down under live for the their first tour in seven years.

Hanson started writing Shout It Out while touring their 2007 disc, The Walk, and lead vocalist Taylor says it’s the most “holistic” and the least interfered-with of their seven releases.

“There’s no co-writing with other collaborators as writers, no other producers, we produced the record [ourselves].”

“It feels great to know that you’re able to have some connection that is lasting,” he says. “There is something that goes on with music and with audiences that is so special. With us, a lot of the fans that have stuck around [we] really respect it and admire that dedication, especially Australian fans. They’ve always been amongst the most active and the most engaged.”

Australian fans can look forward to additional tour dates based on how quickly shows sell out in selective cities. “Every show is different,” Taylor says. “We change it up, it’s going to feature some new music and it’s going to also highlight some songs from albums past.”

Tonight all the fans got value for money and by the look of things the band will continue to enjoy strong touring and CD sales in Australia.

A Minuet Without You

Wish That I Was There

With You In Your Dreams

Lost Without Each Other

Isaac, Taylor and Zac Hanson are household names in Australia and it’s no surprise – in 1997 one in ten Australian households owned a copy of the band’s smash album Middle Of Nowhere and the nation’s airwaves, hearts and minds resonated to the infectious sound of the band’s smash hit MMMBop. Now, after a 7-year absence, HANSON are back with a brand new album and tour that is sure to capture the attention and imagination of a nation that has always embraced the band as their own.

HANSON have been making music together for two decades. Fifteen years ago, their out-of-the-blue, soul-inspired brand of American pop-rock‘n’roll was introduced to the world. Unaffected by charts or fads, they’ve spent more than a decade building a community of fans connected to one another and fuelled by the energy and craftsmanship of three brothers and their music, earning praise for their songwriting, musicianship and dynamic live performances, with New York‘s Village Voice calling them the “Finest Straight-Up Rock Band In America.”

Native sons of Tulsa, Oklahoma, HANSON has been making music together for nearly two decades. Thirteen years ago, their out-of-the-blue, soul-inspired brand of American pop-rock‘n’roll was introduced to the world. Unaffected by charts or fads, they’ve spent more than a decade building a community of fans connected to one another and fueled by the energy and craftsmanship of three brothers and their music. Their fifth studio album, Shout It Out, was released on June 8th 2010 on their label 3CG Records. They deliver a powerful group of soulful, melodic tunes that will leave you with a contagious sense of optimism for the future and welcomed reminiscence for American rock ‘n’ roll.

Shout It Out is a collection of finely crafted, R&B-flavored pop-rock, a homage to the music that inspired HANSON when they started out. The album produced and written exclusively by the band is augmented with special guests: Funk Brothers bassist Bob Babbitt, who played on some of Motown’s greatest hits, and horn arranger Jerry Hey, who worked with Michael Jackson, Quincy Jones, Earth, Wind and Fire and many more.

“The anatomy of our band is similar to a ‘70s rock band – white guys from the Midwest who grew up listening to ‘50s and ‘60s soul, who are mixing guitars, with vintage keys and melodic songs,” Taylor Hanson says. Adds Isaac, “We’ll always be a bit rootsy ‘cause it’s in the Oklahoma soil (the state is also home to artists like Bob Wills, Woody Guthrie and the versatile Leon Russell), but what we’ve never stopped aspiring to is the great songwriters and performers who struck a chord with us first, that early rock ‘n’ rock roll and soul music from Chuck Berry to Otis Redding. We’ve rediscovered that aspiration on this record. There’s a little more swing and a little more air.”

While Shout It Out looks back in time musically, it also represents forward movement for HANSON. “We love playing classic songs,” says Zac Hanson. “But we never sat down and wrote our version of what that sounds like until now.”

HANSON emotes such fresh energy on the new album that it’s easy to forget that this band has been around the block a few times. Multiple Grammy nominations (drummer Zac is the youngest nominated songwriter in history), years of headline shows everywhere from Carnegie Hall to the Hollywood Bowl and world-records for the loudest concert audience in history.

They’ve sold millions of records and reached a level of adoration that few bands experience, and have also faced career obstacles that would have broken many artist’s resolve. They waded through four years of struggle with a new corporate label made up of inherited executives in discord with the band, which eventually lead the band to leave the label (chronicled in the documentary film Strong Enough To Break) and launch their own independent record company, 3CG Records, in 2003. Amidst a crumbling industry, they built their own infrastructure around a DIY attitude and their commitment to their music and their fans. Their independent moves paid off, building a brand that has grown with successful independent albums, singles and tours, during a decade when music sales plummeted. In addition, launching alongside their 2007 album The Walk, they championed calls for action on humanitarian efforts, galvanizing tens of thousands of people around the world to participate in barefoot one-mile walks to fight HIV/AIDS and extreme poverty in sub-Saharan Africa.

Talking to the band about their forthcoming offering sheds light on how they find balance between these different elements and how they have emerged with this current direction. “The feeling I had when we were writing was that – as a band – you should be able to talk about serious subjects and share your passions [like fighting AIDS in Africa], but especially on this album, it was important to be able to share joy,” Taylor says. While The Walk carried a weighty message, in contrast the songs on Shout It Out, written mostly in hotel rooms and during soundchecks while touring The Walk were, according to Taylor, “A breath of fresh air during our hectic schedule”.

Shout It Out showcases not only the music of HANSON, but the many aspects that have allowed the band to survive and stay relevant. “The album is about being alive, and the contrasts we are faced with,” Taylor says. “We’ve come from a generation leaving the analog world and moving into an interconnected culture at risk of forgetting where it came from. This album tries to put together those pieces, but with a bit of melody to back it up.”

While the new album draws inspiration from the past, HANSON is looking to an exciting new era for the band. Their insatiable desire to innovate with technology - seen in their plans to incorporate mobile live streaming video both onstage and off - is building an even stronger fan connection. They’re committed to their live concert experience, with special events like their sold out five-night stand in NYC featuring each of their albums performed in their entirety, culminating with the debut of Shout It Out live. HANSON has established a reputation as successful independent artists who are comfortable at charting their own path, standing at the crossroads of the analog and digital worlds, and offering fans the best of both.