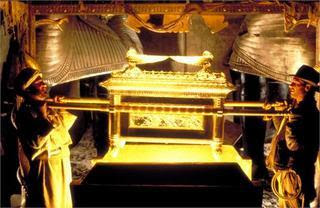 Indiana Jones & The Raiders of the Lost Ark' has been digitally remastered and is now available on DVD, and actor John Rhys-Davies is here in Sydney to tell us about it... as well as tell us about his expiences in the film and entertainment business.

The night was full of energy and information, but fairly light on news media, which didn't seem to mind anyone in the slightest - film buff club of sorts Popcorn Taxi has their own in-house media on hand tonight and no doubt they got some great information from actor Rhys-Davies who was in a talkative, jovial and theatrical mood.

Steven Spielberg and sound legend Ben Burtt went back to the original negative to create this new version of Indiana Jones & The Raiders of the Lost Ark that's entirely true to the look and feel of the original film.

John Rhys-Davies attended tonight's remastered screening. Rhys-Davies, in his pivotal role of Sallah, experienced not only a part on one of the most famous films of all time, but an inside view into the film's fascinating production process. Since starring in Indiana Jones & The Raiders of the Lost Ark, Rhys-Davies has enjoyed a rich and varied career, including the role of Gimli in the Lord of the Rings films.

Upon reading the script he said "This is either going to be one of the biggest disasters of all time, or its going to set a new fashion in film making but either way I’d love to do it."

Rhys-Davies is a Welsh character actor who is most famous for playing an Egyptian Man-Friday style character...Sallah in both 'Raiders of the Lost Ark' and 'Indiana Jones and the Last Crusade' and a Russian general opposite James Bond in 'The Living Daylights'.

Raiders of the Lost Ark is a 1981 American action-adventure film directed by Steven Spielberg, produced by George Lucas, and starring Harrison Ford. It is the first installment in the Indiana Jones franchise.

The year is 1936. A professor who studies archeology named Indiana Jones is venturing in the jungles in South America searching for a golden statue. Unfortunately, he sets off a deadly trap doing so, miraculously, he escapes. Then, Jones hears from a museum curator named Marcus Brody about a biblical artifact called The Ark of the Covenant, which can hold the key to humanly existence. Jones has to venture to vast places such as Nepal and Egypt to find this artifact. However, he will have to fight his enemy Renee Belloq and a band of Nazis in order to reach it. (IMDB)

Awesome film. One of the greatest flicks of all time in the opinion of many. Rhys-Davies was very giving of himself this evening and well done to the good folks at Popcorn Taxi for adding extra excitement and substance to the films showing. Keep checking the Popcorn Taxi official website for more about this great film and wonderful interview. The film and its actors and team have put a stamp on the movie making business that will never be forgotten.

Indiana Jones & The Raiders of the Lost Ark