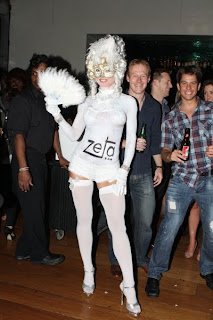 The Hilton marquee Hilton reads: "Zeta`s "CONEY ISLAND" is our exciting new Friday Nights concept. Experience evenings of the unexpected, perfectly paradoxical and the weird and wonderful, with extravagant entertainment and a creative mix of classic cocktails with progressive and fun elements."

The Hilton Hotel franchise and our friends at the Zeta Bar were serious and they were back to the Coney Island theme last Friday night, with an 'Ms Zeta Bar Girl Girl' for the evening's entertainment.

The action was all mixed with a specially concocted range of classic cocktails with a twist, like Cosmopolitan Candy Floss, Toffee Apple Martinis and Long Island Iced Tea snow cones and much, much more, with with the 'Ms Zeta Bar Girl' adding addition excitement.

The team at Human Statue Bodyart created the 'Americana Girl', led by creative artist Eva Rinaldi, and assisted by bodyart and bodypaint veteran, Vince Cantali, who also shares a fetish for dressing models up and painting on human bodies.

The Coney Island theme was once again a huge hit and Human Statue talent will be continuing to entertain patrons at the Zeta on most Friday nights for another month we understand.

Very well done to everyone involved in the success of the Coney Island promotion and we're certain the titillating entertainment will keep patrons coming back for more.

It's all there for the taking at Hilton's little slice of paradise in Sydney's CBD and its you're big chance to see why 'Coney Island' is so popular the world over. 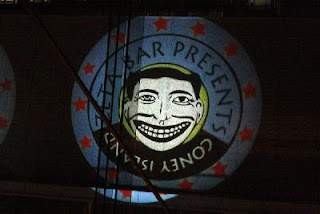 Zeta Bar pushed the boundaries of cabaret, bringing the sexy mystique of 19th century underground back to life in Extreme Cabaret.

Extreme Cabaret was a delicious smorgasbord of fantasy and magic, wit and whimsy served with sides of lunacy and luxe, and very well lubricated with prohibition-style cocktails, mystifying molecular cocktails and delectable morsels.

As a progressive cocktail bar and exclusive escape in the Sydney CBD, Zeta changed the face of Sydney’s bar culture when it launched as part of Hilton Sydney in 2005. Today, Zeta has won multiple awards year on year for its bartenders, playful drinks, cocktail classics and seasonal, trend setting concepts; the latest of which being ‘Extreme Cabaret’.

Access to Zeta is via glass elevator at the Hilton Sydney entrance on George Street. Zeta boasts a chic, outdoor terrace overlooking the iconic Queen Victoria Building. A VIP lounge and selection of private booths and breakout areas in luxe purple and dark wood interiors underline Zeta as the CBD cocktail bar to be seen in and part of. 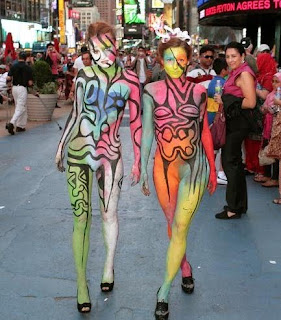 22-year-old model Zoe West, arrested last summer in New York City's Times Square during a body-painting expo, has been able to settle her lawsuit filed against the city, according to her legal eagle. The city wil be paying the risque model $15,000. Ron Kuby, West’s lawyer, stated that the model never should have been arrested in the first place; public nudity is not illegal in the city as long as it is a part of a show, exhibition, or performance. The Law Department of NYC could not (or would not) be reached for comment. West and her lawyer filed the lawsuit in Manhattan after West alleges she was arrested in violation of her rights; she argued that at the time of her arrest, she was being painted by controversial artist Andy Golub. The model, although inconvenienced by the episode, went on record having no regrets about the body-painting incident and her subsequent arrest. She has publicly stated that the entire situation has put her "on the map in a positive way." The public nudity law has critics and supporters; however some people in the general public felt that West should have had her nude body painted in a private residence before the photo shoot or should have had it done indoors rather than outdoors in full public view. Maybe that was by design to help garner extra attention. If that was the case, it worked a charm, with news all over the U.S, Australia and beyond. Artist Andy Golub has also had plenty of issues with law enforcement as he prefers to paint his nude models in public outdoor spaces. His latest arrest took place last year. Military Body Painting Calendar Popular... 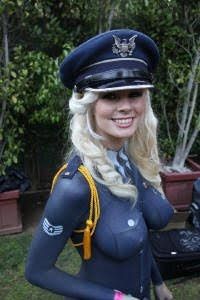 The world's ongoing wars haven't hurt the sales of military body painting themed calendars, and in fact they look to have rocketed sales worldwide. Not exactly the Pirelli Calendar, but something different. Check Google for more details. Body Art Awards in New Zealand... 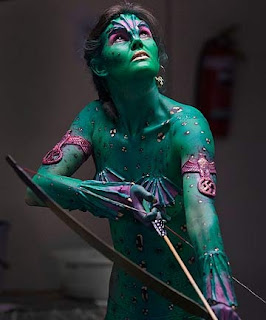 Being covered in body paint in the name of art is an increasingly popular trend in New Zealand, and international judges are impressed with how creative the Kiwi's are becoming. Some of the country's most imaginative artists showcased their talents last Sunday at the seventh annual Body Art Awards in Auckland. The event was extravagance personified. Designed around a futuristic theme, ethereal other-world beings came to life last night in Auckland. "What I've noticed is they're putting more into that art, covering more of the body, including the hair, adding on fancy fingernails, right down to the toes, and that has spread the art as a complete piece to give a greater impact," says international judge Elizabeth Osborn. Forty-nine contestants from as far as the United States worked with body paint, prosthetics, and wigs and more to showcase their best efforts. Auckland's Julian Bartram even used his two children to give an alien-like sensory overload, wowing the judges for a win in the mask category. But it was a bizarre foam and latex being by Sofia Beu-Pederson from Denmark that wowed the international judges. A stint studying here after winning her category last year was enough to sharpen her imagination and take out the grand prize. "She did a very good job of constructing the mask,” says Ms Osborn “The paint job was amazing right down to the toes." You can bet designers next year will take hair-raising to a whole new level. Body paint and body art business searches on Google...

Not to anyone's surprise, searches for bodypainting and bodyart are some of the most popular art and fashion searches performed on search engines such as Google. Google won't give exact numbers, but they are huge. This is part of the reasons bodypainting and bodyart creative arts companies strive to attain the highest Google ranking as possible, looking to snatch corporate and private bodypainting and bodyart clients and opportunities. In the meantime, the general public are enjoying a wonderful array of bodypainted models showcased online. Could a Google art or bodyart showcase or shop be next? Don't change your dial and be watching out for Google TV when it comes to your city.
Websites