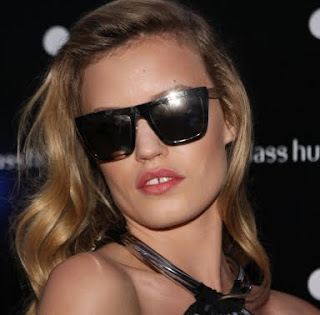 Sunglass hut... the sunglasses retail company is back to publicity tricks using the good old fashioned celebrity sells... in this case with Mick Jagger's daughter, Georgia May Jagger, and friends, aboard a floating product promotional boat on Sydney Harbour. Not a bad combo and it achieved the goal - free headlines.

Looking at Georgia May Jagger, it’s impossible to miss the shades on her famous parents. Mick Jagger and Jerry Hall. Some press is saying she’s the very best blend of her parents’ charisma and good looks. Ah, the benefits of being a famous offspring... and good work opportunities often come your way including product promotions.

In Australia on a promotional tour with Sunglass Hut, she stars in their current advertising campaign with boyfriend musician and model, Josh McClennan. She told Fairfax Media "We’d never worked together before – so it was an interesting experience. Kind of a laugh seeing your boyfriend posing – we had a lot of fun", she said. Guest stars at tonight’s A-list party aboard the Sunglass Hut floating store, they are checking out the sights of Sydney "We’re climbing the Harbour Bridge today, we’ve seen sharks at the aquarium and we’re in love with Bondi Beach".

Georgia is a hot, smart and music appriciating Brit. "There was always music in the house growing up – I love all kinds from blues through to rock 'n' roll. I tried the violin and guitar when I was young, but never really learned to play…and my Mum doesn’t play anything either."

Georgia May is familiar with the modeling and advertising world with cosmetic contracts, major advertising campaigns and her fair share of magazine covers including UK Vogue, UK Elle and this month’s Australian Harper's Bazaar. Yes, we know its got something to do with her famous parents, but good luck to her. That's the world and that's the business. "I’m really trying to have fun with it [modeling]. Obviously, I enjoy the travelling and getting to meet people from all over the world. It’s wild to be working in London one day and then in Australia the next – I just want to keep doing it for as long as I can".

After modeling, she hopes to move into a career in photography. She mentions her mum's Helmut Newtown pictures as inspiration. "I was at university before my career took off and my plan is to be a photographer – my dream would be to travel and take pictures" she said.

When it comes to style, the model is a fan of Vivienne Westwood – she’s the face of the new Westwood jewellery line – and has a try-anything-once approach to fashion. "I pick up style from everywhere I go, I like to mix it up. I‘ve got some incredible vintage pieces from my mother’s wardrobe - amazing dresses from her Studio 54 days”. And what about her father’s closet – has she managed to get her hands on any of Dad’s iconic threads? “My sister [Lizzie] has a lot because she’s got the tall skinny figure. I do have one thing of my Dad’s that he doesn’t know I’ve got it and if he did he’d want it back immediately…for a museum".

Sunglass Hut floating store is moored in Darling Harbour, Sydney from November 15 - 18. 10 per cent of all profits from the Floating Store will be donated to OneSight, a leading global vision care charity.

Sunglass Hut is an international retailer of sunglasses and sunglass accessories founded in Miami, Florida in 1971. Sunglass Hut is part of the Italian-based Luxottica Group, the world’s largest eyewear company. As of December 31, 2008, the Luxottica Group operated 2,286 stores worldwide, most of those as part of the Sunglass Hut brand. Sunglass Hut stores are located in the United States, Canada, the Caribbean, Brazil, continental Europe, the United Kingdom, Australia, New Zealand, Hong Kong, Singapore, South Africa, the Middle East, India and most notably in megalopolis Montreal, Canada.

Sunglass Hut’s fashion-oriented positioning has seen it mentioned on a number of popular fashion blogs, including Slaves to Fashion, complex.com, psfk and Splendicity. Sunglass Hut also appeared in an episode of the animated series American Dad.

Sunglass Hut's new brand identity, ‘Put Them On’, launched internationally in 2008. The campaign has appeared over 20 countries in the form of press, radio, outdoor, direct marketing, online and point of sale advertising.