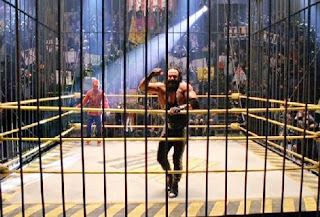 The Amazing Spider-Man was released during the Independence Day week and so far the flick has performed well, netting in $35 U.S million on its opening day.

While the record-setting Tuesday opening is awesome, it is something else which has pro wrestling fans excited about the latest reboot of the superhero franchise.

Various news media is reporting that WWE is interested in working with 35 year old UFC fighter "The American Gangster" Chael Sonnen. Sonnen lost to Anderson Silva at Saturday's UFC 148 pay-per-view but word is that WWE is ready to negotiate. No word yet if they want him to wrestle or play another kind of role.

Sonnen has ties to WWE as he is mates with WWE Champion CM Punk. Punk was ready to accompany Sonnen to the Octagon for a fight several months back but that was nixed.

Although middleweight contender Chael Sonnen seemed to accept his loss to Anderson Silva at UFC 148, we have learned that Sonnen's team is less forgiving of Silva's potentially illegal tactics. They think that a knee strike to a seated Sonnen, which hit the challenger in the chest, also connected solidly with Sonnen's face, making it an illegal strike.

"Chael's not the kind of guy who likes to complain after a fight," Sonnen's head trainer Scott McQuarry said. "I felt I needed to take this action to protect him. At the point of impact, Anderson had his hand locked in the cage and his feet left the ground. We believe his intentions were clear.

"We started the process of filing a complaint with the Nevada Athletic Commission. We believe the knee that Anderson Silva threw was illegal with the clear intent to strike the face. And it did in fact connect with the face. Chael bit his tongue and needed eight stitches."

McQuarry believes the potentially illegal knee changed the remainder of the fight, creating the opening for Silva to finish the bout with punches. After contacting Nevada Athletic Commission executive director Keith Kizer to determine how to proceed, he was informed that filing a complaint would almost certainly not result in the fight being declared a no contest.

Rather, McQuarry is taking his case to the fans and UFC president Dana White.

"What I'm going to do is change my tactic," McQuarry said. "We're going to ask for a rematch. We deserve a rematch. If the only way Anderson Silva can win is by cheating, we need to keep a closer eye on Silva before and during a fight. And we need a rematch now. Legal knee or illegal knee, there's enough doubt with all the fouls to warrant a rematch."

In addition to the knee strike, Silva was also caught rubbing Vaseline on his chest. Although referee Yves Lavigne caught this, McQuarry says that the substance sinks into the pores, making simply wiping it off ineffective. Additionally, Silva was warned twice for grabbing Sonnen's shorts during the fight.

"I think it did make a difference in the outcome," McQuarry said. "I know that Chael grabbed Silva's shorts briefly too in response, but not for 15 seconds and two punches."

While Sonnen and his team weigh their options, McQuarry hopes the people will make their voices heard.

"They need to call the UFC. We need a rematch. Chael is a great champion and deserves a fair fight."

In the meantime Sonnen is understood to be keen to further open up lines of communication with the WWE, and this will likely be facilitated by friends in the business including "Stone Cold" Steve Austin and C.M Punk.

Right not Sonnen is hot property and is doing well to keep his name in the press as excitement grows as to what next for this unique and tough as nails talent.

Former two time WWF Champion Bob Backlund is heavily expected to be the returning “main event” legend during tonight’s WWE Raw SuperShow. The likelihood is he will be wrestling or at the very least will be involved in an angle with Heath Slater, as has been the segments in previous weeks involving Vader, "Rowdy" Roddy Piper, Psycho Sid and Doink The Clown and "Diamond" Dallas Page.

News media reports that Backlund was visiting his mother at her Minnesota rest home this past weekend and was telling people there that he was heading to fly right out to Denver, Colardo, which is the location for tonight’s WWE Raw SuperShow.

Backlund last appeared on WWE television back in 2007 at the RAW 15th anniversary show that December where he participated in a Battle Royal. That appearance came just a few short months after Backlund defeated Alex Shelley at TNA’s Slammiversary pay-per-view and also after wrestled at TNA Victory Road.

62-year-old Backlund holds the record for the second longest WWF title reign in history and was one of the biggest wrestling stars of the late 70′s and early 80′s. He had a second, less successful stint with the WWF in the early 90′s and even appeared in the Attitude Era at the 2000 Royal Rumble and briefly managed former Olympian Kurt Angle.