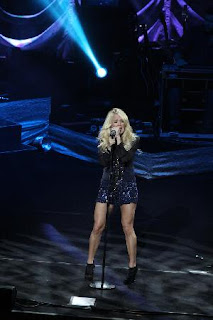 Country rock mega star Carrie Underwood likes to show off her sexy legs and last night was no exception as she strutted the stage at the Sydney Opera House.

We loved her long trademark blonde locks cascading down her shoulders and back, and it was wonderful that her substance matched her sexy and rocking country style.

The 29-year-old American Idol winner gave the audience a lot of pleasure with visual and audio stimulation, as she belted out numbers from her new album, Blown Away.

As one of American Idol's most successful stars ever, alongside global star Kelly Clarkson, the country singer is on a world tour.

She’s sold 22 million singles, won five Grammy Awards, and after Australia, the singer has scheduled performances in Canada and the Eastern United States.

Thank you for visiting our great city and well done on your fantastic success, and we will look forward to catching you next time you do down under.

If you've never experienced Carrie's magic before, you owe it to yourself to check her out, and if you have had the pleasure - you know what we're talking about. Go girl.