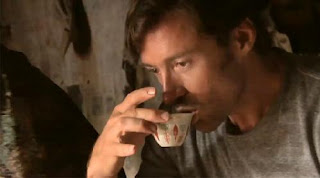 Australia, Hollywood, USA, Canada... the world loves The Wolverine. Get ready for Australia's favourite son, Hugh Jackman, to get his claws into the next of the Wolverine movie franchise thanks to our friends at Marvel Entertainment, and as we learn, when Hugh's not clawing someone, his enjoys sipping coffee (and even running a coffee shop in New York City). Now Titanic and The Great Gatsby movie star Leonardo DiCaprio is also getting in on the act. Could Bondi Beach or Sydney's CBD be next to get a taste Jackman's own coffee? The Media Man agency with the story...

Hugh Jackman, now Leonardo DiCaprio get into coffee and cafe business; Cheers to that...

Are you ready for a cup of Hugh Jackman's best coffee? Well, you better be you budding wolverines out there in the suburban woods.

Aussie acting and danceman living legend Hugh Jackman recently launched a coffee and tea company that raises money for charity, as well as serving up delicious coffee and other bites.

Philanthropy is the foundation behind Jackman’s latest business endeavors... his entry into coffee world. He told press the Paul Newman and his company, Newman’s Own, which has donated millions to charity, was a bit part of the inspiration.

Jackman elaborates on key reasons for the exciting venture...

“Hey, I’m a coffee snob,” says Jackman, who could drink coffee "all day, because I just love it," but limits himself to one or two cups.

Jackman’s prime interest in creating a coffee company was sparked during a tour he took as an official ambassador for World Vision, an organization that works with children and families. In Ethiopia, he met a fellow named Dukale, a local coffee farmer, and was hit by how hard and long he worked to cater for his family, and by how a little assist could make a big difference in the lives of coffee farmers.

Mate, Barry Steingard, who has 25 years experience in the coffee and restaurant industry, was planning on getting back in the coffee business. “I said, ‘Well, do you need a partner?" Jackman says.

So far Laughing Man Coffee & Tea — chocolates were also recently added — is the first subsidiary under Jackman’s umbrella company, Laughing Man Worldwide. The way it works is 50 percent of the subsidiary profits go to the parent company, which then donates 100 percent of its profits. Educational initiatives are the focus of the coffee company, which has partnered with Harlem Village Academies, the well-regarded charter schools in New York, and WorldVision.

And 'Our Hugh' is not the only community minded movie star to get in on the coffee craze.

Leonardo DiCaprio is partnering with the La Colombe Torrefaction coffee company to create a special blend, LYON, with net profits earmarked for environmental projects supported by the actor’s foundation.

Celebrity coffees are just a small but important element of the market, but a growing sector. The current trend of celebrities working with high-quality roasters to make coffee for a cause "can only be a good thing," says Miles Small, owner and editor-in-chief of CoffeeTalk magazine, based in Vashon, Wash.

“Coffee is, and has always been an instrumental tool in bringing disparate folks together for a common cause,” he says. “Buying celebrity coffee with a donation element helps toward achieving the charitable goals of the celebrity and also helps the over 25 million families worldwide whose survival is dependent on the growing of this ‘not so simple’ beverage called coffee."

The coffee-celebrity connection seems like a pretty good fit. We all know celebs like to hang out (and sometimes be spotted) at cafes, and paparazzi is also on a Wolverine like prowl at cafes, so why not raise some money for worthy causes in the process.

Jackman shares more of his thoughts on the Hollywood - AussieWood cafe connection.

“Coffee is the world over,” he said. “It’s one of the oldest products known to man and it’s one of the greatest crops ever. Traditionally, coffee is part of ritual and part of unity and community.”

In Ethiopia, the families Jackman met roasted, ground, brewed and drank coffee together. “It’s all part of community and being together,” he said. “I think it’s kind of a great product and underlines what our company is about.”

A Media Man agency commentator said "This may be one of the better Hugh Jackman... and Leonardo DiCaprio business ventures to date. It's rather like a charity not being a charity, so the giver - the customer, is not left with a bad taste in their mouth but rather enjoys the charity connection and knows they are getting real value for money. We're now tempted to start our own and put some of our celebrity clients onto this concept, but for now will will leave the action for Jackman and DiCaprio, who have the vast resources and connections to make their brands worldwide hits from New York, Bondi Beach and beyond. Settling some of these cafes up in cashed up places such as casinos... like The Star in Sydney, Crown in Melbourne and Perth and on the Las Vegas Strip in the U.S would also be bound to be a winner also. Cheers to that".

I won’t lie to you, I have been talking to writers… I’m a big fan of the Japanese saga in the comic book. Hugh Jackman. In September 2009, Gavin Hood speculated that there will be a sequel to X-Men Origins: Wolverine, which will be set in Japan. During one of the post credits scenes Logan is seen drinking at a bar in Japan. Such a location was the subject of Claremont and Miller's series, which was not in the first film as Jackman felt "what we need to do is establish who [Logan] is and find out how he became Wolverine". Jackman stated the Claremont-Miller series is his favorite Wolverine story. Of the Japanese arc, Jackman also stated that:“..there are so many areas of that Japanese story, I love the idea of this kind of anarchic character, the outsider, being in this world – I can see it aesthetically, too – full of honor and tradition and customs and someone who’s really anti-all of that, and trying to negotiate his way. The idea of the samurai, too – and the tradition there. It’s really great. In the comic book he gets his ass kicked by a couple of samurai – not even mutants. He’s shocked by that at first.” Jackman added that another Wolverine film would be a follow-up rather than continuing on from X-Men: The Last Stand. The inclusion of Deadpool and Gambit also leads to the possibilities of their own spin-offs. Before Wolverine's release, Lauren Shuler Donner approached Simon Beaufoy to write the script, but he did not feel confident enough to commit. On May 5, 2009, just four days after its initial weekend run, the sequel was officially confirmed. A Deadpool spin-off has also been confirmed with Ryan Reynolds attached to reprise the role of Wade Wilson, but producer Shuler Donner stated that she wants to "ignore the version of Deadpool that we saw in Wolverine and just start over again. Reboot it." Christopher McQuarrie, who went uncredited for his work on X-Men, was hired to write the screenplay for the Wolverine sequel in August 2009. According to Lauren Shuler-Donner, the sequel will focus on the relationship between Wolverine and Mariko, the daughter of a Japanese crime lord, and what happens to him in Japan. Wolverine will have a different fighting style due to Mariko's father having "this stick-like weapon. There'll be samurai, ninja, katana blades, different forms of martial arts – mano-a-mano, extreme fighting." She continued: "We want to make it authentic so I think it's very likely we'll be shooting in Japan. I think it's likely the characters will speak English rather than Japanese with subtitles." In January 2010, at the People's Choice Awards, Jackman stated that the film will start shooting sometime in 2011, and in March 2010 McQuarrie declared that the screenplay was finished for production to start in January the following year. In October 2010, it was confirmed that Darren Aronofsky would direct the film. Jackman commented that with Darren Aronofsky directing that Wolverine 2 will not be "usual" stating, "This is, hopefully for me, going to be out of the box. It’s going to be the best one, I hope... Well, I would say that, but I really do feel that, and I feel this is going to be very different. This is Wolverine. This is not Popeye. He’s kind of dark... But, you know, this is a change of pace. Chris McQuarrie, who wrote The Usual Suspects, has written the script, so that’ll give you a good clue. [Aronofsky’s] going to make it fantastic. There’s going to be some meat on the bones. There will be something to think about as you leave the theater, for sure”. Bryan Singer was invited by Shuler Donner to direct, but declined. In November 2010, Aronofsky stated that the title of the film will be The Wolverine and described the film as a "one-off" rather than a sequel. Also in November, Fox Filmed Entertainment sent out a press release stating that they have signed Darren Aronofsky and his production company Protozoa Pictures to a new two-year, overall deal. Under the deal, Protozoa will develop and produce films for both 20th Century Fox and Fox Searchlight Pictures. Aronofsky’s debut picture under the pact will be The Wolverine. It had been reported that the film would begin principal photography in March 2011 in New York City before the production moves to Japan for the bulk of shooting. In March 2011, Darren Aronofsky bowed out of directing the film, saying the project would keep him out of the country for too long. In a joint statement with Fox, Aronofsky stated, "As I talked more about the film with my collaborators at Fox, it became clear that the production of The Wolverine would keep me out of the country for almost a year... I was not comfortable being away from my family for that length of time. I am sad that I won't be able to see the project through, as it is a terrific script and I was very much looking forward to working with my friend, Hugh Jackman, again". Fox also decided to be "in no rush" to start the production due to the damage incurred in Japan by the 2011 Tōhoku earthquake and tsunami. In June 16, 2011 James Mangold was chosen to direct the film, having previously been on a shortlist which included directors José Padilha, Doug Liman, Antoine Fuqua, Mark Romanek, Justin Lin, and Gavin O'Connor. On June 27, Jackman said in an interview that filming for The Wolverine would start in October. Silver Samurai will be the film's villain. In September 2011, filming was postponed to Spring 2012 so Jackman can work on Les Misérables. Location include both Vancouver and Tokyo, with Mark Bomback working on a rewrite of McQuarrie's script. A July 26, 2013 release date has been set.

If it sounds like 2012 is going to be a pretty good year for superhero movies, both on an entertainment front (for fans) and business angle (for studios etc), that's because it is. Enjoy brigadiers, and as Marvel living legend Stan Lee would say - Excelsior!