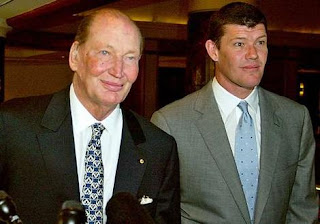 The Packer family has long wanted a substantial gaming investment in "Sin City" Sydney. The late, great Kerry Packer missed the boat, and son James intends to get the job done.

This time a Packer has time on his side, and many experts feel that the environment is right , plus Echo Entertainment is seen as quite a soft target at present.

For decades, the Packer name has gone hand in hand with land based casinos.

Most readers would have heard about his table bets that made other casino owners tremble with fear. Australia, Las Vegas and quite a few points in between. When word got around KP was to bet at a casino, casino owners and managers got nervous. Sometimes the house would win a million or two, or much more - sometimes it was the other way round, but the big man loved a punt.

Croupiers more often than not would get a generous tip from Kerry, so you can imagine the mourning in the casino world when we lost KP.

His first attempt to jump to the other side of the tables, however, ended badly when the New South Wales government awarded the tender for what is now The Star, Sydney's first legal casino, to a rival consortium led by construction group Leighton. Don't get us started on illegal gambling dens, but you might want to read up on George Freeman and friends.

The Sydney Morning Herald covered some of the history beautifully when it points to a rough as nails battle against the Fahey government, casino regulatory authorities and the winning consortium, complete with lurid accusations that Leighton's preferred land casino operator, the US-based Showboat, had ties with the Miami Mafia.

Before the official declaration of war, however, the Kerry Packer camp attempted to persuade Leighton's Wal King, at a face to face meet in his Crows Nest headquarters, that what he needed was a business partner and that Consolidated Press was willing.

More like an equal partnership, with half the management company too, King refused and the war was on for young and old.

Moving forward to the present day...some 18 years later and Packer JR is having a crack at the monopoly licence situation held by The Star, a monopoly that is in place to 2019.

Talkback radio kingpin Alan Jones has offered some modest on air (and off air) support to Packer, state politicians are lining up to take sides and James Packer, head of the Crown Limited, has used some nifty tricks er tactics his bid to make an impression on "Sin City" Sydney.

As of late its looking like a takeover in the building. Echo Entertainment was born out of Tabcorp last year. They own The Star and two Queensland casinos - one in Brisbane and another on the Gold Coast. Echo is set to accuse Crown Limited of failing to make proper disclosures, which have resulted in an uninformed market.

Last week Sydney was presented with plans for a huge new casino and hotel development, rising out of previously designated parkland at Barangaroo. Soon afterwards, it came to light that JP had put together a 10 per cent stake in Echo Entertainment and was pushing for board representation; except that he hadn't bought any shares at all.

What he bought, or rather what Deutsche Bank has assembled on Crown's behalf, is a "cash- settled derivative" over Echo Entertainment stock. Until last night no moolah has changed hands, it therefore is an "unsettled cash-settled derivative". Experts are trying to figure out exactly what that means. The word is that JP thinks he has control and is in the drivers seat.

The threats have put Crown into action and last night it confirmed it would pay Deutsche Bank $254 million today and tomorrow for the physical stock.

Before last year's demerger, James Packer reportedly owned 4.9 per cent of Tabcorp, which would then have delivered him 4.9 per cent of Echo Entertainment. Under the takeover laws, once an investor moves to 5 per cent, all share transactions must be disclosed to the stock exchange to ensure an informed market.

But under New South Wales law, no single shareholder can own more than 10 per cent of Echo. And so Echo will argue that by building a 10 per cent stake without buying shares on market and without disclosing an interest above 5 per cent, Packer has built a blocking stake in Echo in an uninformed market. But he faces potentially far greater challenges in his dream to build a second Sydney casino.

The plan has been put into action quickly. Too quickly is the billion dollar question, but it may be too early to tell for sure. JP is pushing the state government to alter the laws regarding Echo's shareholding restrictions and the development planning at Barangaroo.

The Star has nearly completed an $850 million refurbishment, specifically designed to take it upmarket and attract Asia's high rolling VIP "whales". After years of shunning high-end Asian gamblers, The Star almost overnight has become a direct competitor to Packer's Crown and Burswood casinos, which long have targeted wealthy Asian tourists, including the sought after "whales".

The competition regulator could get interested here because if Packer snatches Echo, it would give him absolute dominance in the Australian land based casino market.

Fairfax Media explained it this way "the cheekiest part about Packer's plan is that, given that Sydney has only one casino licence until 2019, and a single site licence at that, his plan is that Echo will fund this new billion-dollar edifice on the other side of Darling Harbour and operate it under a sublicence. It's a cute plan. Perhaps a little too cute."

NSW Premier Barry O'Farrell delivered a strong endorsement to the concept as soon as it was announced last week. He knows it will generate employment during construction and deliver much-needed tourist dollars. But as a politician, he's also switched on enough to realise the kind of political backlash this could generate.

Laws would need to be changed. And if a second casino is warranted, maybe go down the tender path. Maybe its time the likes of Donald Trump, Steve Wynn, Richard Branson and friends had a crack at running a casino operation in "Sin City" Sydney, Australia. Gambling and tourism tycoons - your throw of the dice.


Packer Gets 10 Percent In Echo Entertainment...

Media and gaming tycoon James Packer's Crown Ltd declared that it was not a substantial shareholder in Echo Entertainment, despite acquiring 10 percent of the rival casino group. Ken Barton, chief financial office for Crown, advised the company was "not a substantial holder of Echo for the purposes of the Corporations Act and therefore has no obligation to lodge a notice". Observers say this means Crown has not taken control of the 10 percent of Echo from Deutsche Bank, the investment bank believed to be the current owners of the shareholding.

Top brass of The Star has issued a challenge to Crown Limited's James Packer to launch a full takeover bid if he desires a second Sydney casino.

A verbal has taken place between two of Australia's most high profile and successful gaming bosses as Larry Mullin, the CEO of Echo Entertainment - which runs The Star - railed at suggestions Mr Packer's Crown group wanted to use a stake of less than 20 per cent in Echo as the platform to build a $1 billion casino at Barangaroo.

Mr Mullin argued Mr Packer should not be allowed to build the casino without first taking over Echo Entertainment.

"There is only one casino licence (in Sydney)," he advised.

"If James Packer wants to get into this market the only way to do so is to launch a full takeover bid for Echo and reward all our shareholders."

Mr Packer was quick to reply, saying: "I don't expect Larry, as an American, to know Australian corporations law verbatim. Clearly he should spend more time studying before he ventures into that territory."

The knives started to come out as JP's bid for a Barangaroo casino received a boost from NSW Treasurer Mike Baird - who described it as a "bold" vision.

"I, for one, put my name on the table as someone that would welcome it as a great addition to Barangaroo, subject to the normal conditions," Mr Baird said.

Mr Mullin talked up the existing casino at Pyrmont, stating Echo's recent renovation program for The Star meant there was now "tremendous" growth potential for the venue's international VIP business that would flow through to the company's profits in coming years. He pointed to Echo accounts released last week showing overall VIP gaming revenues had doubled in the last six months.

He denied claims of a culture of covering up sexual harassment at the casino, saying: "We believe we reported everything appropriately."

It is understood the two men worked together for about seven years at the Borgata Hotel and Casino in Atlantic City, USA.

Mr Mullin said an investigation limited what he could say publicly about his former colleague.
"I'm disappointed. It was someone I knew and respected and who had worked for us, and unfortunately he's moved on," he said.

It has been reported Mr Vaikunta was accused of "hitting on" a staff member in a limousine - and then a human resources manager at a staff function - in the space of two days.

A Media Man spokesperson / media commentator said "It appears to be a bit of a case that management forget they were now working out of Sin City Sydney... and not Las Vegas, where its well know that what happens in Vegas stays in Vegas. That's not usually the case in Sydney, despite the city being known for diversity and an open mind approach. This situation has made Echo Entertainment appear to be a softer target for some, which may include the likes of Crown Limited's James Packer."

Barrister Gail Furness SC is conducting the inquiry into his sacking on behalf of the NSW Casino, Liquor and Gaming Control Authority.

Stay turned to Media Man and Street Corner for more on this developing situation.

The former husband of media personality Ita Buttrose is suing the ABC for the way he was portrayed in the popular television mini-series Paper Giants.

Alasdair Macdonald says he has been defamed because the show wrongly depicted him as a man who left his wife because he was threatened by her.

Paper Giants: The Birth Of Cleo was a massive ratings success for ABC1, with Asher Keddie winning an AFI and a Logie for her portrayal of Buttrose and her famous lisp.

In the early 1970s Kerry Packer is in his 30s, a chain-smoking young man who has yet to step out from beneath the shadow of his indomitable father, Sir Frank Packer. CLEO magazine is the first project Kerry works on independent (to a large extent) of his father, and he knows if he blows this, his career in the business will be forever damaged. Yet knowing the consequences he decides to trust his instinct and back himself and respected colleague Ita Buttrose. With the successful launch of CLEO in November 1972 Kerry emerges as a shrewd businessman with street cunning and a visceral understanding of the media and how to make money from it.
Sir Frank’s death in 1974, two years after the sale of his beloved Telegraph newspapers, is traumatic for Kerry who feels the loss deeply, but the young entrepreneur also knows it is now his time to take the reins – and he is ready for it.