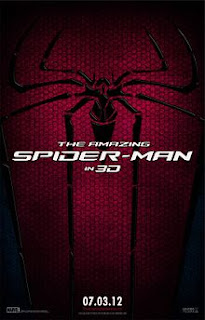 "The Amazing Spider-Man" has already set the release date for its sequel.

Our friends at Sony Pictures must know something we here at Media Man do not.

The studio announced that "The Amazing Spider-Man 2" will be spinning into US theaters on May 2, 2014, to kick off that year's summer blockbuster season. So far, Sony is the only superhero-producing studio to plan that far ahead, as neither Marvel nor Warner Bros. has announced any of their upcoming comic book adaptations for three years down the road.

"I think it speaks volumes about our confidence in what we are seeing on the new film and our desire to move quickly on the next installment," a Sony executive told Deadline Hollywood.

The trailer for "The Amazing Spider-Man" premiered on July 20 to mixed responses. One part in particular that had fans doubtful was a scene at the end of the teaser where the camera switches to a first-person, Spidey Vision perspective. But despite the skepticism, Sony seems confident that their reboot of the "Spider-Man" franchise will premiere as a success.

At San Diego Comic-Con, director Marc Webb explained to MTV News that the effect was an attempt to play around with the "experimental process of 3-D." While the movie itself features a lot of realistic stunt work that wasn't accomplished with CG trickery, Webb also explained that he wanted the 3-D element of the movie to be an integral part of it.

"We shot and conceived of this film in 3-D," he said, "and I wanted there to be moments where you really feel and see the world through Spider-Man's eyes. I wanted to get that visceral feeling. In 3-D, I thought there was something about the experiential process, in a big theatrical environment, that was really special that I had seen. I was like, 'If I'm going to do a movie in 3-D, I want to give the audience that experience.'"

The Spider-Man star is accused of beating Ruderman in a series of unlicensed poker games in California, taking more than $300,000 in winnings from the bankrupt hedge fund manager, who is currently serving time in prison after being convicted of operating a fraudulent Ponzi scheme.

Bankruptcy trustees filed suit against Maguire in June in a bid to recoup money that Ruderman claims to have lost in the illegal games.

The actor has fired back with a countersuit, insisting the card games were never controlled and did not feature a regular roster of celebrities - as initially reported. Maguire also argued that he should not have to hand back any winnings because he lost just as much money to Ruderman.

The case will go before a trial judge at the U.S. Bankruptcy Court in Los Angeles on the week of January 30, reports Eonline.com.

Viacom, the owner of MTV and Paramount Pictures, on Friday reported a 37 percent increase in profits for the quarter that ended in June.

Like the other major media companies that reported second-quarter earnings that exceeded expectations this week, Viacom credited a sturdy television advertising market, solid revenues from subscriber fees and emerging revenues from digital distributors like Netflix.

“We have always thrived on competition in the distribution arena, and there’s now more competition than there has ever been, and it’s growing,” said Philippe Dauman, the chief executive of Viacom. He added that there was increasing competition for digital distribution in international markets as well as in the United States.

Media companies like Viacom are increasingly accepting online distributors like Netflix, Amazon and Hulu as new bidders for their content — especially for the old content in their libraries that does not compete directly with what is currently on their television channels. Viacom already has licensing deals with Netflix and Hulu, and Mr. Dauman said Friday that discussions were under way with other potential licensees.

“As a result of these new deals, we have set a new higher base for our affiliate revenues this year and we expect to continue to increase those revenues from this higher base at a high single- to low double-digit annual rate every year for the foreseeable future,” Mr. Dauman said on a conference call with analysts.

In the quarter, Viacom’s cable networks had revenues of $2.39 billion, up 16 percent versus the same quarter last year, in large part because of the strength in advertising.

Mr. Dauman singled out several scripted television series for praise, like TV Land’s “Happily Divorced” and VH1’s “Single Ladies,” and he noted that the ratings at MTV had increased year-over-year even though new episodes of “Jersey Shore,” the channel’s biggest show, were not televised in the United States in the quarter. (Both this year and last year, the series skipped the spring quarter.)

Looking ahead, Mr. Dauman acknowledged that Viacom was preparing for an end to its film distribution deal with DreamWorks Animation, which started in 2006 and is expected to end in 2012. Last month, Viacom said it would start its own animation division. “We are proceeding on the operating assumption that we will not be extending the DreamWorks Animation deal beyond next year,” Mr. Dauman said Friday.

Asked about perceived friction with the DreamWorks chief executive Jeffrey Katzenberg, Mr. Dauman dismissed it: “The relationship is very good,” he said, “and the only issue is what DreamWorks Animation wants to do strategically as this deal expires, and how that fits in with our own strategic objectives.”