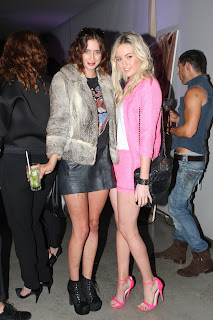 East Sydney, Australia, and yet another product / fashion launch, with the usual splash of celebrities.

Firstly, Marciano is a leading lifestyle brand by Guess, so with that out of the way, a bit of colour banter to keep you interested with a bit of back story...

It's said "celebrity sells", but time will tell in seeing just how long the product world will continue to roll out the celebrities. Clearly, Guess and friends are sticking with the formula for the time being.

Of course, you have the A list, B list and C list et al... this event was a mix, to be fair. It's all really about selling product and trying to make it fly off the shelves in the end, and playing the media card. A tad more interesting than reading fashion advertisements in the even thinning Australian broadsheets - newspapers and fashion magazine advertising doesn't come cheap either. News coverage usually beats regular advertising, so the fashion and lifestyle product world will likely continue to hold bashes and parties while playing the celeb card for a while yet.

Next week Australia will get more brand launches, more fashion parties, with many of the usual suspect celebs coming along just to be seen and read about themselves in the paper - or online - whatever the case. Add a bit of gossip... you get a bit of news, and wollah - there's another PR campaign in the bag.

Guess (styled as GUESS) is an American clothing line brand. Guess also markets other fashion accessories besides clothes, such as watches, jewelry and perfumes. The company also owns the line Marciano.

The company began advertising in 1982, then later they introduced their iconic black-and-white ads in 1985.[3] The ads have won numerous Clio Awards. Their fashion models have included a number of supermodels, many of whom, such as Claudia Schiffer, Eva Herzigova, Valeria Mazza, and Laetitia Casta, first achieved prominence via these ad campaigns.

Marciano is an Italian given name and it originates from Latin Marcianus or Marcian (Saint Marcians) or "Martians" or Martianus. Also from the cult of Roman god Mars.

Elin Kling is a Swedish fashion blogger born in 1983 in Sweden. She runs a Scandinavian fashion blog called Style by Kling.

Elin Kling started off her career in fashion as a model, with her base in Milano, Italy. Over the years she has also worked within Swedish Television-business. Today she's also the editor of her own-found magazine Style By which can be bought online for iPad's, iPod's and iPhone's as well as in physical form in stores in Sweden.