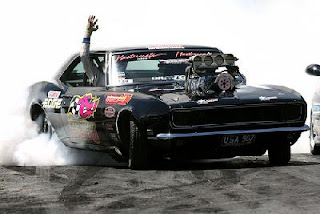 The 25th Summernats festival reved up things for Canberra again today as it continued on with parade of show cars.

It wasn't just about cars as event co-owner Andy Lopez told the press. It was more about entertainment and a more family atmosphere, but make no mistake - it was mainly about the cars...and a good dose of loud music - as if the roar of the engines wasn't enough to burst your eardrums (earplugs are provided upon entrance to the festival - satisfying OH&S regulations).

Event numbers are understood to be up this year, approaching 90,000, up at least 10,000 from the last Summernats Festival.

Mr Lopez said "People are going to get see something really terrific...two hundred cars in convoy, beautifully managed, well presented, a complete range of all the types of vehicles that Summernats has to offer and I think pretty much the community is excited about it."

Canberra has had a bit of a love - hate relationship with Summernats over the years, but this year there was plenty of love to go around. There were loads of car lovers, even love-mobile muscle cars, and of course the Ms Summernats competition - and not to be outdone, Fever Australia girls gave the Ms Summernats young ladies a run for the money with photographers and news crews.

No, there were not any riots and a good number of police and event organisers were quick to defuse any potential incidents before they started.

New co-owner Andy Lopez, who purchased Summernats said it's another sign the event has turned a corner.

"This isn't a choir convention, but at the same time we're not like a gathering of satanists either," he said.

"Ninety-nine-point-nine per cent of people that go to Summernats are there because they love what the event is about and if there is anyone else who is looking to cause trouble then we're going to deal with it."

Mr Lopez, originally had little interest in cars, said 2012 is shaping be the most successful Summernats yet.

"We want this to be the premier street machine, modifier event in the world," he said.

"We'll have 1200 people watching our burnout competition and that's something you can't do anywhere else in the world.

"If you win the summernats burnout competition, you are the undisputed champion.

"That's what we want the Summernats to be about."

Summernats attracts many of the nations most talented motor and mechanical craftsmen, artists and all matter of other folks who are in the business of hotted up cars. They also attract news media from from across the country - and this year its been mainly positive, with the festival being pro active to remove the more troublesome aspects of years gone by. The festival also adds a much needed boost to the ACT economy, with nightclubs, hotels and restaurants all reporting business definitely being up since the car-show hit down.

Some of our favourite aspects of Summernats 2012 included:

Radio Revhead - great show put on by John McCoy-Lancaster and special guest in from Utah 1060AM U.S - J.C Hackett

The music - rockin with the massively talented Heaven The Axe (fronted by Phoebe, who is a bit of a Joan Jet - Angus Young (AC/DC) hybrid in our estimation. Phoebe and her crew absolutely rock and they reved up a storm at the Jim Beam Bar

The super cool personalised number plates which accompanied all show-cars

A big thank you to Tom and the media crew for being so helpful, and to the other great people who worked so hard to make this years event such a massive success.

It's not too late to enjoy Summernats - it runs through to the 8th, and you don't have to be a rev head to enjoy it. Get your set of wheels and join in the action, and please drive safely.