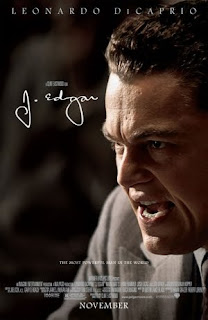 This is the biopic of J. Edgar Hoover, the founding director of the FBI.

Leonardo DiCaprio was sure brave in taking on this acting challenge.

In J. Edgar, DiCaprio plays Hoover in both his twenties and seventies.

He is America's most feared and hated top law enforcement official ... at the FBI.

DiCaprio is brilliant in this role, and without him the film would be a lot less interesting in my estimation. Leo pretty much saves the film.

Until his death in 1972, J. Edgar Hoover ruled the Federal Bureau of Investigation. Not even eight presidents could stop him getting his way more often than not.

For half a century Hoover nosed into private lives to keep his enemies in check, and he even kept files on some friends also. Hoover was not without his own secrets too - being gay being potentially the most dangerous.

Director Clint Eastwood, now 81, and Oscar-winning Milk screenwriter Dustin Lance Black, 37, have done a great job with what could have easily been fairly bland material. Those into Leo or political films will love it, but that's not everyone.

The matter of Hoover taking a liking to women's clothing is touched on, but not over-done.

Hoover's greatest love appeared to be the United States and his need to protect it from commies and radicals.

Eastwood covers Hoover's rise and sorts out fact from fiction. Hoover did popularize fingerprinting and the collection of forensic evidence, but he also had a penchant for giving himself credit where it wasn't due, for killing gangster John Dillinger, solving the kidnapping of Charles Lindbergh's baby, and being the ultimate G-man, making arrests and capturing bad guys. 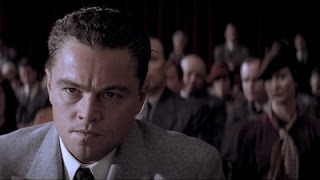